Downey, after ‘Son of God’ box office success, aims for other markets 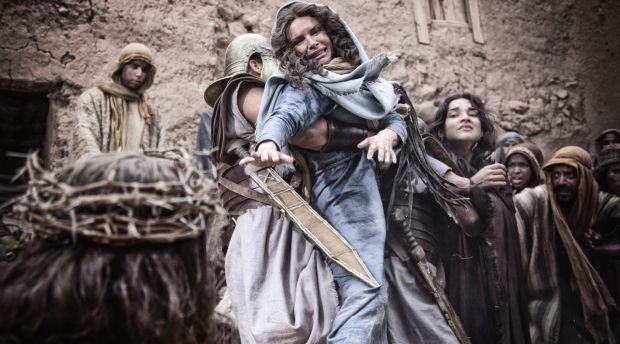 Roma Downey stars in a scene from the movie "Son of God." The upcoming movie should be seen as "a love story," according to two of its executive producers, the husband-and-wife team of Mark Burnett and Downey. (CNS photo/Fox)

WASHINGTON (CNS) — After a first-weekend box office take of $25.6 million, actress-producer Roma Downey plans to take the movie “Son of God” into other markets.

“We have a big rollout planned. Our attention is slowly being brought to global distribution,” Downey said in a March 7 telephone interview from Los Angeles with Catholic News Service.

“I think over the course of the next year we’ll see it rolling out in all kinds of places in all kinds of languages. People whose lives will be impacted forever. Because in many of these nations, they wouldn’t have an opportunity read a Bible or go to church,” Downey said. “This may be their first experience with Jesus and our Gospel. That is very exciting.”

There are plans afoot to expand the reach of “Son of God” within the United States as well. A Spanish-language version of the film, a dramatic retelling of Jesus’ life, made it to 200 U.S. screens in the first weekend of release. In its second weekend, that number jumped to 350.

Many younger Hispanic moviegoers are bilingual, but “many of the older members of their families are not,” Downey said. “You bring your mom, bring your grandmom, bring your family together in community to experience it together. I think the Spanish community has been underserved in so many ways.” Versions of “Son of God” with Korean and Mandarin subtitles are also expected soon in U.S. theaters.

The second weekend box office for “Son of God” slumped to $10 million, placing the movie fifth in U.S. box office receipts. Ahead of it were “Non-Stop,” which was the only film to have beat out “Son of God” in its premiere weekend, plus two new films and the early-year comedy hit “The Lego Movie.”

Even so, “we exceeded the studio’s expectation,” Downey told CNS. “We could have had half that (business in the first weekend) and it would have been considered that it did well. We gave ‘Non-Stop’ a run for its money.

“But of course the Irish people are loving it because (‘Non-Stop’ star ) Liam Neeson is No. 1, and we’re No. 2,” she said. The Northern Ireland-born Downey was not only executive producer of the movie with her husband, reality-show producer Mark Burnett, but she also played Jesus’ mother, Mary, in “Son of God.”

The initial weekend’s turnout likely benefitted from many denominations and churches buying out entire theaters to screen the movie for its members. Promoters of “Son of God” were aware of four U.S. dioceses that did the same.

“Son of God” also got a boost from endorsements by leaders in several different faiths.

Other prominent Catholics back the production include Supreme Knight Carl Anderson, of the Knights of Columbus; liturgical music composer John Michael Talbot; and actor-producer Eduardo Verastegui.

John Mulderig, CNS’ associate director for film reviews, said “Son of God” was a “reverent but uneven screen version of the Gospel story” but that it “ranks as a worthy revival of the Hollywood biblical epic.” Despite “moments that range from the moving to the awkward,” the movie “offers some solid catechesis and an easy introduction to the Lord’s earthly biography.”

It was classified A-III — adults — for “strong gory violence,” due to scenes deal with Jesus’ crucifixion, but that given the subject matter, it was “probably acceptable for older teens,” Mulderig said.