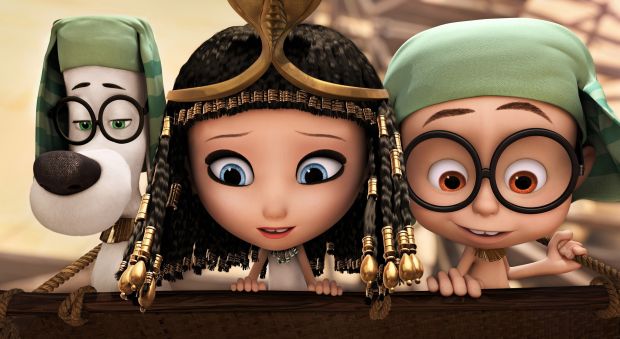 That’s because, in their original incarnation, the latter duo figured in a series of short cartoons that were shown as part of the TV show “Rocky and His Friends,” which premiered in 1959, and its re-titled successor, “The Bullwinkle Show,” which ran until 1964.

For those outside the hippie-turned-yuppie demographic, introductions may be in order. Mr. Peabody (voice of Ty Burrell) is a hyper-intellectual dog whose many accomplishments include his invention of a time-traveling device called the WABAC machine. Sherman (voice of Max Charles) is the perky human son Mr. Peabody adopted as an infant, after finding him abandoned in an alley.

The opening of director Rob Minkoff’s big-screen, 3-D updating finds this unusual pair at an emotional crossroads: Sherman is about to start school for the first time, an event that will remove him from the vigilant supervision Mr. Peabody has always exercised over him.

Sherman’s academic career gets off to a bumpy start when he runs afoul of classmate Penny Peterson (voice of Ariel Winter). Jealous of Sherman’s superior knowledge of history — gained, of course, via the WABAC — Penny taunts him by saying that, since his father is a dog, Sherman must be one as well.

As though to vindicate the charge, Sherman unwisely brings their quarrel to a climax by biting Penny. This transgression not only lands Sherman in the principal’s office, but — thanks to the scowling intervention of know-it-all social worker Miss Grunion (voice of Allison Janney) — places Mr. Peabody’s continued custody of him under threat as well.

During a get-together designed to smooth things over with Penny’s parents (voices of Leslie Mann and Stephen Colbert), Sherman, whose antipathy toward Penny masks an unacknowledged attraction, tries to impress her by taking her for an unauthorized spin in the WABAC — with the upshot that she winds up stranded in ancient Egypt.

The path to Penny’s rescue zigzags chronologically from the court of King Tut to Renaissance Florence and back to the city of Troy on the eve of its destruction by the Greeks. Familiar figures putting in appearances along the way include Leonardo da Vinci (voice of Stanley Tucci), who’s here endowed with the accent and manner of a old-time organ grinder, as well as a knuckleheaded version of famed Greek warrior-king Agamemnon (voice of Patrick Warburton).

Craig Wright’s screenplay adds a tiresome amount of potty humor to the elaborate, sometimes groan-inducing puns characteristic of the original material. And a lone adult-themed play on words, though it will certainly fly over youngsters’ heads, still seems jarringly out of place.

But basic history lessons for the youngest moviegoers, together with a worthy message about respecting people of different backgrounds — even if they do happen to be canines — endow this more than usually literate children’s adventure with some countervailing virtues.

The film contains scenes of mild peril, several scatological jokes and sight gags and a single double entendre. The Catholic News Service classification is A-I — general patronage. The Motion Picture Association of America rating is PG — parental guidance suggested. Some material may not be suitable for children.

NEXT: Downey, after ‘Son of God’ box office success, aims for other markets