In two popular comics, faith is central for one hero, missing in another 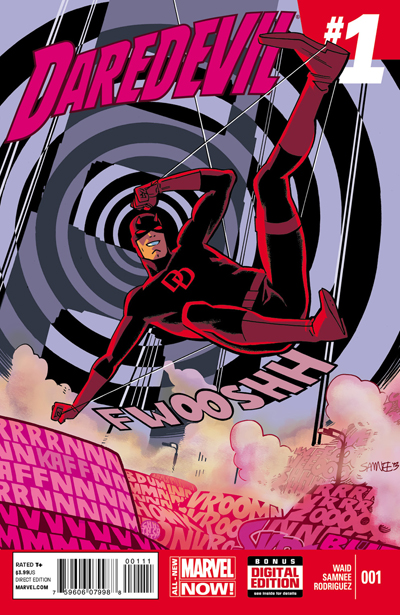 This is the cover of the comic book “Daredevil.” (CNS photo/Marvel)

NEW YORK (CNS) — The nuclear family and orthodoxy serve as bulwarks against a culture that’s increasingly hostile to people of faith. Such is the message of one of the titles currently being published by Marvel Comics.

The comic in question is not “Daredevil” — the protagonist of which is one of the few superheroes who is identifiably Catholic — but rather “Miss Marvel.”

The latter is a new and much-publicized series about a teenage superhero named Kamala Khan. The twist: Kamala is a Muslim.

One night, Kamala disobeys her parents by going to a party where she is served alcohol. On the way home Kamala is stopped by a group of superheroes, including Iron Man and Captain America, and given special powers. She also is given a lecture about not abandoning the teachings of her family or faith to indulge in the corrupting practices of her secular peers.

“Miss Marvel” offers a positive depiction of religious belief, and has been praised in the media for doing so.

Yet faith is missing from the new “Daredevil,” a popular Marvel title that has just been rebooted. First introduced in 1964 by Stan Lee and artist Bill Everett, Daredevil has turned 50 years old, and Marvel has given him a new series. It’s a fresh and fun launch, but one that ignores Daredevil’s Catholicism.

DD, as he’s known for short, is one of the most interesting of Marvel’s superheroes. His alter ego, Matt Murdock, is an attorney. Murdock is blind. But the same accident that robbed him of sight gave Murdock heightened “super senses” that allow him to hear, “see” — with internal “radar” that bounces off surrounding objects — smell, and touch with superhuman ability.

Murdock also is the son of a boxer who was murdered and a mother who became a nun — Sister Maggie. At various times his past writers have shown DD’s Catholic faith, including a scene where he had to interrupt his own confession because he heard a crime taking place outside the church.

The new “Daredevil” is being written by comic veteran Mark Waid and drawn by Chris Samnee. It’s a terrific read, full of intelligence, kinetic energy, and good storytelling. The creators have moved Murdock from New York to San Francisco, which means they can’t rely on the tired comic-book trope of Manhattan being annihilated by aliens.

There is no nudity or profanity. The first issue contains nothing that would be inappropriate for children.

In this issue, Daredevil solves a kidnapping by deploying his superpowers, his reason and his courage. A young girl has been taken, and Daredevil uses the sounds of a phone call from her location as well as her doll to pinpoint where she is.

It turns out that her captors are terrorists who have implanted a bomb in her watch, which they plan to set off once she’s surrounded by a large mass of people. Daredevil intervenes with a wonderful mixture of swashbuckling and smarts.

The writing, too, is sharp; Waid has fun with Daredevil’s efforts to negotiate his new West Coast environment.

But this refreshed “Daredevil” could be an even deeper, more rewarding experience. Its subject, after all, is now living in a city that is both militantly secular yet rich with Catholic history.

Murdock doesn’t have to become a parish priest or imitate his mother by joining a religious community. The role of his layman’s faith in his newfound life could lead, on its own, to interesting drama.

PREVIOUS: Streaming TV for pre-teens: Fraught with peril or promise?