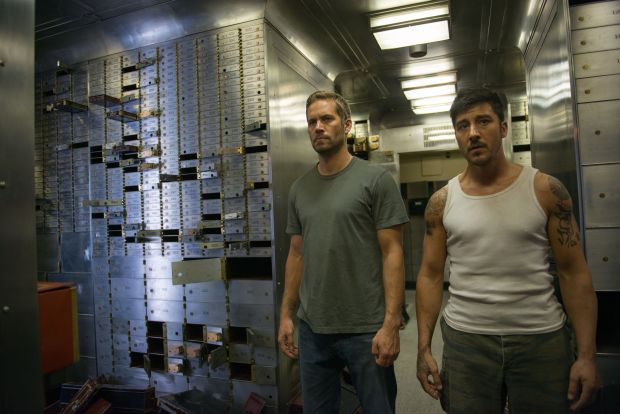 NEW YORK (CNS) — Combat, albeit of a stylized kind, is the whole point of the action picture “Brick Mansions” (Relativity). Though gore is kept to a minimum, some of the mayhem registers as vicious, if only by implication.

In a version of Detroit even more dystopian than its current reality, the dilapidated housing project of the title has become so dangerous that it’s been walled off from the rest of the city. Within its crumbling halls, drug lord Tremaine Alexander (rapper RZA) holds sway, though his rule is challenged by anti-narcotics vigilante Lino Dupree (David Belle).

He gets his opportunity when a weapons heist has the authorities panicking, and they assign Damien to retrieve the situation by infiltrating Brick Mansions with Lino as his guide. Lino has an agenda of his own, however, since Alexander has kidnapped his ex-girlfriend, Lola (Catalina Denis), in a bid to draw Lino into his lair.

Belle is one of the originators of a practice known as Parkour, which enables its devotees to move through an urban setting at maximum speed using physical discipline and taking spontaneous advantage of various elements of the environment. “Brick Mansions” showcases Belle’s skills in this regard to entertaining effect, his impressive maneuvers providing welcome relief from all the brawling.

As bullets fly and cars race for the rest of the running time in director Camille Delamarre’s adaptation of the 2004 French-language film “Banlieue 13,” a wildly unrealistic plotline has the Motor City’s ruling class scheming to use apocalyptic means to gentrify Brick Mansions.

Screenwriter Luc Besson, who co-wrote “Banlieue 13” with Bibi Naceri, plays on resentment fueled cynicism in his caricatured portrayal of the urban elite. He also justifies Alexander’s criminality as nothing more than an oppressed underdog’s attempt to adapt to his surroundings.

If some of the scenes appeal to envy, others are designed to excite a certain brand of lust. Thus, in her captivity, Lola is subjected to the unwanted attentions of Alexander’s leather-clad underlying Rayzah (Ayisha Issa) who threatens the prisoner with a combination of torture and lesbian rape.

A souped-up Mustang (Alexander’s pricey ride), endless fistfights and one chick menacing another. What more could a movie offer?

The film contains pervasive action violence, some of it brutal, a threat of homosexual rape, a glimpse of partial nudity, frequent crude and crass language and a couple of obscene gestures. The Catholic News Service classification is L — limited adult audience, films whose problematic content many adults would find troubling. The Motion Picture Association of America rating is PG-13 — parents strongly cautioned. Some material may be inappropriate for children under 13.

NEXT: Movie review: The Other Woman