Movie review: The Other Woman 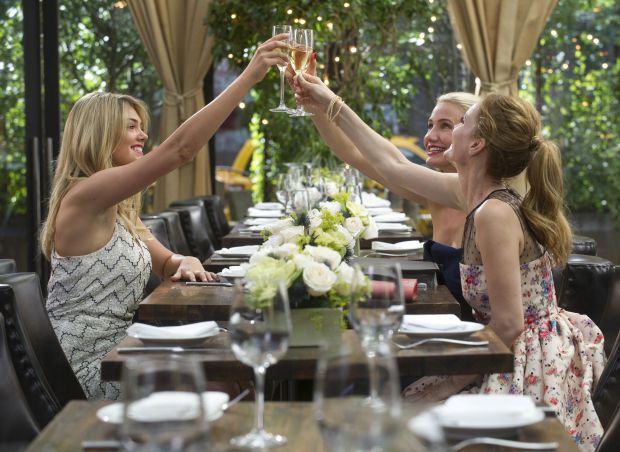 Kate Upton, left, Cameron Diaz and Leslie Mann star in a scene from the movie "The Other Woman." (CNS photo/Fox)

NEW YORK (CNS) — When a screenwriter’s armory of jokes is so depleted that a large dog having a very visible accident qualifies as a sight gag, moviegoers of taste will want to steer clear. And so they should in the case of the crass comedy “The Other Woman” (Fox).

The circle of hard-done-by womanhood is further extended when Carly and Kate begin spying on Mark and discover that he has another paramour stashed away in the Hamptons, a goodhearted but not overly intelligent bikini-filler by the name of Amber (Kate Upton). Unlike Carly, we learn, Amber knew Mark was married but was told that he was in the process of divorcing the supposedly unfaithful Kate.

Along the way to their inevitable triumph, the humor in Melissa K. Stack’s script plays on a range of distasteful subjects — from intimate personal hygiene to the effect of lacing Mark’s cocktail with a powerful laxative. And marital fidelity takes a hit as a result of Mark’s unrelenting sleaziness and dishonesty, qualities that make Kate’s readiness to jettison him all too easy to understand.

The opening scenes, which chart Mark and Kate’s initial fling, also reveal some distorted underlying values. Thus the pair comes home from their first date already fumbling to undress. Mark pauses long enough to suggest that, since they’ve just met, they might want to talk and get to know each other before hitting the sack. But Kate’s agile legal mind quickly produces a counterproposal: They can talk later.

The film contains an adultery theme, a marital bedroom scene, an implied casual encounter, pervasive sexual and much scatological humor, a couple of uses of profanity and frequent crude and crass language. The Catholic News Service classification is L — limited adult audience, films whose problematic content many adults would find troubling. The Motion Picture Association of America rating is PG-13 — parents strongly cautioned. Some material may be inappropriate for children under 13.

NEXT: A dilemma for TV watchers: more news but less content