A challenging but worthwhile read on U.S. church and how it changes 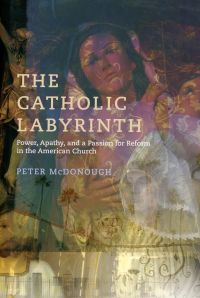 Peter McDonough, professor emeritus at Arizona State University and twice a Fulbright fellow, begins his book “The Catholic Labyrinth” with these words, “The argument of this book is not that Catholicism changes … the story concerns how the church changes and by how much, and the direction of the change as well.” In the following 303 pages McDonough takes the reader through a large assortment of ideas (“What causes the church in the United States to move?”) and looks in detail at some of the Catholic organizations and personalities that are present in the Catholic Church in the U.S. today.

In 13 chapters (along with a Conclusion and a section titled “Conjecture”), McDonough explores neo-conservatism’s culture and strategy within the church, the attempt to reform church management styles, and church reform movements, ending with the conjecture section where he compares the church’s current situation with the decline of the Ottoman empire.

To write this book, McDonough conducted in-depth interviews with many of the key players for the various movements within the church. He shows a deep understanding of the groups’ history and traditions, and their reason for existing. This information alone makes the book a valuable read for anyone interested in this topic.

When the author is at his best, his writing is clear, concise and informative. At other times, however, the writing confuses rather than enlightens. This problem is partly caused by too much information, too many interviews, and trying to juggle too many groups. Stories are told that appear seemingly out of the blue and their purpose for being included at this point in the narrative is not made clear. The author hints at this confusion when he writes, “This is a book about change in American Catholicism in the way that a cubist painting of a guitar is about a guitar.”

That said, this is a book that deserves to be read and studied seriously. McDonough leads the reader through a study of the political, social and sexual issues that are affecting how the Catholic Church in the United States sees and understands itself.

With a few notable exceptions where McDonough seems to adopt a liberal attitude about church teaching and practice (from example, when he writes, “From a purely functional standpoint, the celibacy norm for the priesthood has run its course”), for the most part the author takes no personal stand on liberal or conservative attitudes about the church. Rather, he holds up for examination many of the popular notions being presented and examines them with great care. He is not afraid to write things that either side of the theological perspective might read as critical.

The strongest sections in the book are Part Two, where the author examines the neo-conservative movement within the U.S. Catholic Church, and Part Three, where he explores the ideas of conciliarism and effective management. The most confusing section is Part Four where the author looks at many of the reform groups that would generally be considered liberal or progressive. This section is confusing primarily because the reform groups the author discusses seem to have little in common other than that they advocate for change in the church.

People interested in the future of the Catholic Church in the United States will find “The Catholic Labyrinth” a valuable contribution to the field. Book clubs that are up to a challenging read and a serious discussion will find much here to promote discussion and further study.

Mulhall is a catechist and writer. He lives in Laurel, Md.

NEXT: Moviemaking style makes ‘The Quiet Ones’ a disquieting thriller