Moviemaking style makes ‘The Quiet Ones’ a disquieting thriller 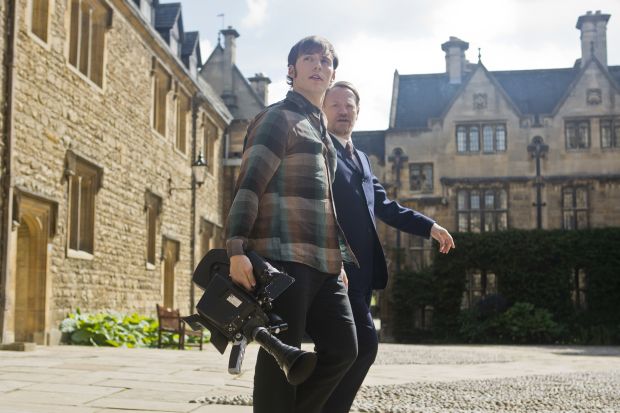 Sam Claflin, left, and Jared Harris star in a scene from the movie "The Quiet Ones." (CNS photo/Lionsgate)

NEW YORK (CNS) — The found-footage trope goes retro in “The Quiet Ones” (Lionsgate).

Writer-director John Pogue avoids an excess of gore in this old-fashioned, reasonably satisfying chiller, set in 1974 England. But Satanism plays a prominent role in his script, while more traditional religion is also dealt with, at least peripherally, in a way that might confuse youngsters.

Standing in for all those latter-day fictional videographers who’ve given us “The Blair Witch Project,” “Cloverfield” and the whole “Paranormal Activity” franchise is young amateur filmmaker Brian McNeil (Sam Claflin). Shy, taciturn Brian is hired by urbane Oxford University don Joseph Coupland (Jared Harris) to document an experimental treatment Coupland and two of his students — Krissi Dalton (Erin Richards) and Harry Abrams (Rory Fleck-Byrne) — are carrying out on a mental patient.

Their fetching but deeply disturbed subject, Jane Harper (Olivia Cooke), demonstrates symptoms that those who credit the supernatural might identify with demonic possession. But resolutely rationalist Professor Coupland is out to prove that science can fully explain, and ultimately cure, Jane’s condition.

Predictably, a series of unnerving experiences follows, causing those around Coupland — not least Brian himself — to have their doubts about his thesis.

Along with the claim to be “inspired by actual events,” Pogue’s movie follows the “Paranormal Activity” pattern by giving us long stretches of perfectly ordinary interaction, followed by various bumps in the night that are more suggestive than definitive.

The occasional sight of blood marks the unfolding of the sometimes less-than-logical plot. But it’s nothing like what viewers are subjected to in a typical slasher flick.

Early on, Coupland notices that Brian wears a silver cross around his neck, which prompts him to ask if the cameraman is a believer. Brian gives an ambiguous, even incoherent, response, and later hangs the cross up on the wall of his room. As things start to get truly eerie, though, he resumes wearing it. And a later scene finds him in a posture — hands folded, head bowed — that might suggest silent prayer.

Overall, though, the picture’s approach to faith can best be described as coy.

That would not be the apt adjective to apply to Krissi who has clearly climbed aboard the bandwagon of the sexual revolution. Though their bedroom antics are more often heard than seen, the audience is made unmistakably aware that Krissi and Harry are engaged in an ongoing fling, one from which Krissi is determined to exclude any pretense of love.

And no wonder, since her bond with Harry — such as it is — doesn’t prevent Krissi from necking with, and trying to seduce, Coupland.

The film contains occult themes, intermittent violence, some of it bloody, a casually physical relationship, flashes of upper female and rear nudity, a couple of uses of profanity and of rough language and a handful of crude and crass terms. The Catholic News Service classification is A-III — adults. The Motion Picture Association of America rating is PG-13 — parents strongly cautioned. Some material may be inappropriate for children under 13.

PREVIOUS: A challenging but worthwhile read on U.S. church and how it changes

NEXT: Hero of ‘The Amazing Spider-Man 2’ really is a good guy