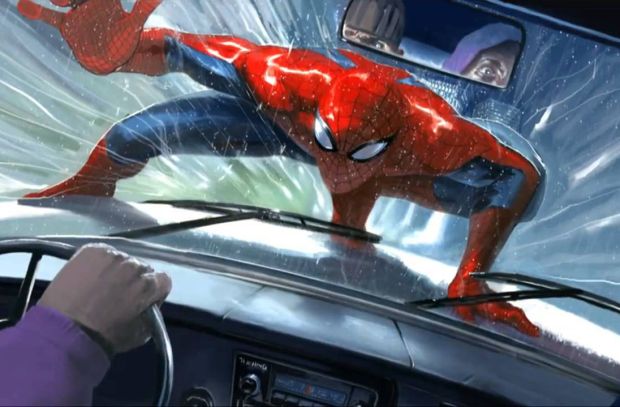 The Amazing Spider-Man is seen in a new graphic novel about the superhero titled "Family Business." (CNS photo/Marvel OGN)

Those words may not have quite the same ring as James Bond’s characteristic self-introduction. And yet “Family Business,” a graphic novel starring Parker’s alter ego, the Amazing Spider-Man, is an enjoyable espionage thriller in which the familiar superhero manages to give not only 007 but Jason Bourne a run for his money.

“Family Business” is written by comic-book veteran Mark Waid and has fully painted graphics by Gabriele Dell’Otto. There is no sexuality or explicit violence, but there are intense action sequences and a fairly complex plot that would probably confuse younger children.

Teen and adult readers, however, will find this a tale consistently guided by strong moral values. In one incident, for example, Parker demands that one of his allies spare the life of a cornered villain.

Parker is heading home through the streets of New York when he becomes the victim of an attempted kidnapping. Not surprisingly, he escapes, thanks to his superpowers. But he’s also aided by a woman who claims to be his sister Teresa. Yet Parker has never had a sister.

Teresa explains that their parents, who died when she and Peter were young children, were CIA agents who kept their kids separated for safety reasons. Teresa is now in the family business, and has come to protect Peter from a group of shadowy evildoers.

Next stop Monaco, where Peter and Teresa dress up like “Ocean’s Eleven” extras and hit the casino. They’re supposed to meet a contact who can reveal who it is who’s out to get them and why.

But the siblings have barely had time to place baccarat bets when the gaming house is invaded by Cyclone, a super-villain who can turn himself into a mini-tornado. He’s gusting for Peter, but then Spidey makes his appearance, and the two brawl.

These are the best panels in “Family Business,” with Dell’Otto’s illustrations offering deep saturated colors and rich realism. Waid’s writing throughout is sharp and intelligent.

So what do the goons want with Parker anyway? The answer involves a neo-fascist group called Hydra and a billion dollars’ worth of Nazi gold that Parker’s parents, Richard and Mary, buried outside of Cairo, Egypt, and that only Parker can access using DNA and facial recognition.

Why Parker’s folks didn’t just give the treasure to SHIELD — the superhero special forces of the Marvel universe — for safekeeping is not explained.

Of course, there’s more. Kingpin, one of the web-slinger’s oldest foes, is pulling strings behind the scenes. And he has an accomplice, Mentallo — a mutant endowed with the power to read and control minds.

Following the twists and turns of the story makes for a fun ride, even if “Family Business” is a bit of a diversion from Spidey’s usual fare. Spies, clandestine intrigue and secret codes, it turns out, make for an enjoyable break from the adolescent drama and outsize battles in which the amazing one more usually engages.

The Catholic News Service Classification is A-II — adults and adolescents. The Marvel Rating System rating is T+ Teens and Up — appropriate for teens 13 and above.

NEXT: Summertime, and the viewin’ is easy, as in undemanding