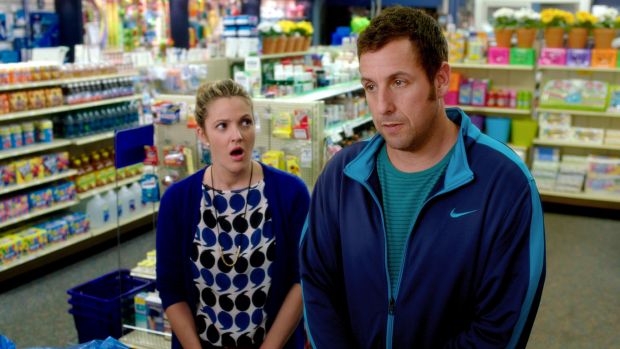 Drew Barrymore and Adam Sandler star in a scene from the movie "Blended." (CNS photo/Warner Bros.)

NEW YORK (CNS) — “Blended” (Warner Bros.) is that rarity of rarities, a sincere family film, and since it stars Adam Sandler, whose trademark is scatological gags, it’s more than a bit of a surprise.

At the same time, director Frank Coraci and screenwriters Ivan Menchell and Clare Sera hew to a rigid formula now common for the genre: Each child’s problem is dealt with individually and completely, without condescension.

There’s an exotic element, too, with blended families developing bonds at a high-end safari resort in South Africa. And there’s even an old-fashioned approach about sons needing fathers to teach them lessons about toughness, and daughters needing a mother’s uniquely compassionate understanding.

Through a mutual acquaintance’s temporary breakup, they both finagle the same South African getaway for their families. Hilarity usually ensues under such circumstances, but instead, Jim and Lauren quickly rise to the tasks of dealing with their children’s issues, which include the normal physical changes for adolescents.

Such matters are dealt with forthrightly, without descending into any crude remarks. Life is dealt with as it occurs. Mature adolescents shouldn’t have trouble with any of this. The script strains not to offend.

From time to time, a South African male chorus led by Nickens (Terry Crews) pops up to lend amusing commentary. It’s all in good fun, and serves as counterpoint to the two families’ most awkward moments.

Toward the end of the story, Jim and Lauren’s budding romance takes an unexpectedly serious twist involving her ex-husband, Mark (Joel McHale), which keeps matters firmly anchored and away from cliches.

The film contains frank mentions of bodily functions, light sexual banter and fleeting crude language. The Catholic News Service classification is A-II — adults and adolescents. The Motion Picture Association of America rating is PG-13 — parents strongly cautioned. Some material may be inappropriate for children under 13.

PREVIOUS: Latest ‘X-Men’ grapples with morals in the past, results in the future