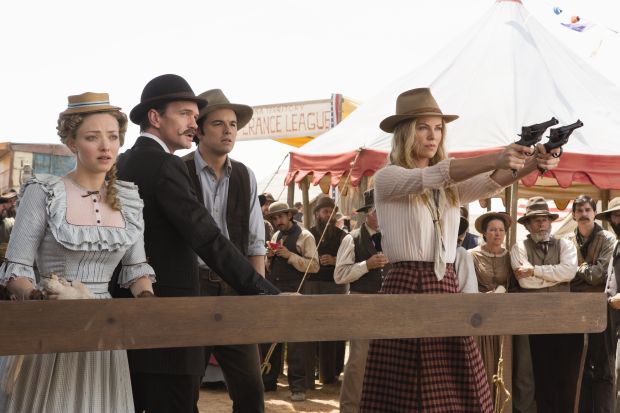 Amanda Seyfried, Neil Patrick Harris, Seth MacFarlane and Charlize Theron star in a scene from the movie "A Million Ways to Die in the West." (CNS photo/Lorey Sebastian, Universal Studios)

NEW YORK (CNS) — Revisionist Westerns, serious films critical of the traditional values and standard conventions of the once-popular genre, were a Hollywood staple during the 1960s and ’70s.

A more lighthearted critique of the same material is the aim of “A Million Ways to Die in the West” (Universal). But coarse humor and a dragged-out story line unsaddle this comedy, directed and co-written by “Family Guy” creator Seth Macfarlane, who also takes the starring role.

Albert’s spirits are at least partially revived when he crosses paths with Anna (Charlize Theron), a beautiful, mysterious newcomer among the tumbleweeds. She befriends him, offering him both emotional support and much-need marksmanship instruction, the latter based on her own outstanding — and, to Albert, seemingly inexplicable — skill with a sidearm.

Friendship predictably leads on to deeper feelings. But Albert and Anna’s budding romance spells trouble for them both since — unbeknownst to Albert — Anna is unhappily married to Clinch Leatherwood (Liam Neeson), the most dangerous gunslinger in the territory.

The script, on which Macfarlane collaborated with Alec Sulkin and Wellesley Wild, establishes positive themes about self-confidence and the need to resist violent machismo. Yet these are intermingled with a frivolous treatment of narcotics, a faulty view of marital fidelity and a good deal of irreverent humor.

Some of that last unwelcome ingredient comes at the expense of courting couple Edward (Giovanni Ribisi) and Ruth (Sarah Silverman). Their religiously inspired chastity in regard to each other is rendered ridiculous by the fact that Ruth is, by trade, a much-patronized prostitute.

The movie enters the gross-out sweepstakes via a sophomoric sequence in which Anna slips Foy a hefty dose of laxatives in order to disable him on the eve of a scheduled shootout with Albert. The upshot is portrayed at noisy, writhing length and culminates in a nauseating visual that infantile audience members everywhere will no doubt find hilarious.

Though such carryings-on have become almost inevitable — “Bridesmaids,” anyone? — here they also serve as one of many indicators that Macfarlane’s comic Conestoga has lost the trail.

The film contains much gory violence, a satirical treatment of faith, scenes of nonmarital sexual activity, some of it aberrant, an adulterous kiss, rear male nudity, drug use, extreme scatological humor, about a dozen uses of profanity and pervasive rough and crude language. The Catholic News Service classification is O — morally offensive. The Motion Picture Association of America rating is R — restricted. Under 17 requires accompanying parent or adult guardian.

PREVIOUS: Summertime, and the viewin’ is easy, as in undemanding