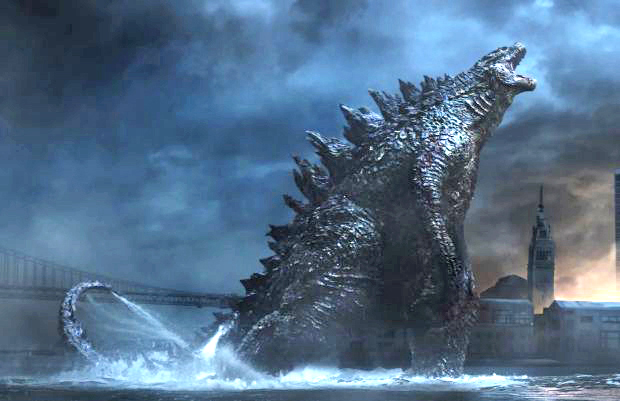 This is a scene from the movie "Godzilla." (CNS photo/Warner Bros.)

NEW YORK (CNS) — Though Facebook may not remind you of the fact, “Godzilla” (Warner Bros.) has a birthday coming up. He’ll turn 60 later this year, and what a busy six decades it has been.

In the years since Japanese director Ishiro Honda first unleashed him on the world, Godzilla has battled The Thing (1964), the Sea Monster (1966), the Smog Monster (1971) and even the Cosmic Monster (1974). And that’s not to mention all the urban landscapes — from Tokyo to the Big Apple — to which he’s laid waste.

Well, what better way for an energetic sexagenarian to celebrate such a moment than with a new 3-D adventure? So at least director Gareth Edwards and screenwriter Max Borenstein seem to think.

Though their extension of the durable franchise suffers from an over-elaborate backstory and uneven tone, it does boast predictably grandiose special effects. And, while characterizations are generic, family bonds among the main players are strong. The film also includes a few religious undertones that viewers of faith will welcome.

This outing might be called “Godzilla vs. the Lieutenant” since its protagonist is an American Navy officer of that rank, Ford Brody (Aaron Taylor-Johnson).

Fifteen years after his mother, Sandra (Juliette Binoche), was killed in a disaster at the Japanese nuclear power plant where both she and his father, Joe (Bryan Cranston) worked, Brody travels back to the Land of the Rising Sun to bail his still-grieving dad out of jail. Not for the first time, Joe has gotten himself in trouble by trespassing in the quarantine zone that surrounds the site of the cataclysm.

Joe refuses to accept the official explanation for the catastrophe. Instead, he obsessively pursues evidence to back his own wild theories about what happened. Though these ideas are far from specific, they do involve sonic transmissions and electrical pulses that were not produced, shall we say, mechanically.

Despite Brody’s efforts to bring Joe to his senses, Joe convinces his son to accompany him on yet another excursion into the no-go area. There they have an encounter with two scientists, Drs. Ishiro Serizawa (Ken Watanabe) and Vivienne Graham (Sally Hawkins), that reveals, rather spectacularly, that Joe has been on to something all along.

The mayhem that ensues cuts a swath of destruction across a number of cities, including Brody’s hometown of San Francisco where his wife, Elle (Elizabeth Olsen), and young son, Sam (Carson Bolde), come under threat. Just as Joe was lastingly traumatized by the loss of Sandra, so Brody’s motivation throughout these latter-day events is his desire to reunite with — and protect — his kith and kin.

The legendary lizard of the title is only one of the outsized creatures rampaging the globe in this installment of his saga. In fact, his adversaries — the explanation of whose nature is part of the excessive exposition cited above — are even less sympathetic than the reptilian star. But at least the human toll this ensemble of monstrosities exacts is portrayed in a stylized, bloodless way. Those who get stomped on simply disappear.

Believers will be pleased with the sight of a military chaplain leading a group of paratroopers in prayer before the climactic showdown, and — if they’re sufficiently eagle-eyed — with the Catholic-looking medal dedicated nurse Elle wears around her neck. But they may wince a little when a character, in describing Godzilla’s place at the summit of the food chain, proclaims him “a god, for all intents and purposes.”

The film contains pervasive action violence with minimal gore, brief marital sensuality and a few uses each of profanity and crude language. The Catholic News Service classification is A-III — adults. The Motion Picture Association of America rating is PG-13 — parents strongly cautioned. Some material may be inappropriate for children under 13.

NEXT: Latest ‘X-Men’ grapples with morals in the past, results in the future