Latest ‘X-Men’ grapples with morals in the past, results in the future 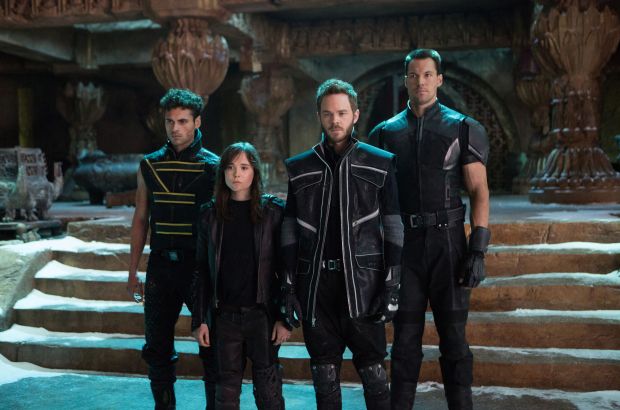 Adan Canto, Ellen Page, Shawn Ashmore and Daniel Cudmore star in a scene from the movie "X-Men: Days of Future Past." (CNS photo/Fox)

There are many surreal moments — Jennifer Lawrence as cerulean shape-shifter Raven/Mystique in a showdown with Richard Nixon, for one — but also some thoughtful moral commentary on whether it’s a good idea to alter the path of history or accept an immutable destiny.

The plot, loaded with the kinetic action sequences familiar from the first six films in the series, is quite simple. It’s 2023 and the planet has been devastated by the Sentinels, fire-breathing robots first unleashed — for American defense! — 50 years earlier. As doom descends on the mutants known collectively as X-Men, the elderly versions of Dr. Charles Xavier and Magneto (Patrick Stewart and Ian McKellen) argue about the need to rewrite history.

Kitty Pryde (Ellen Page) has the ability to send someone’s consciousness back in time, so she sends the most indestructible among them, Wolverine (Hugh Jackman) to 1973 so he can intercept Raven/Mystique before she assassinates the Sentinels’ inventor, Bolivar Trask (Peter Dinklage).

It was after that event that the blue gal was captured and her DNA replicated to make the Sentinels virtually indestructible. If Trask lives, though, he’ll be imprisoned and the nascent Sentinel program will go away.

Wolverine also grabs the younger Magneto (Michael Fassbender), who is being held in a secret underground prison at the Pentagon after being wrongfully implicated in the assassination of President Kennedy. He’s helped by a new character, Quicksilver (Evan Peters), who escapes every jam with his super-high speed.

Discussions about how a single event changes the future mingle with arguments between the younger Xavier (James McAvoy) and Magneto about how best to deal with Raven/Mystique. Director Brian Singer and screenwriters Simon Kinberg and Jane Goldman eventually surrender existential angst to the plethora of special effects, including a flying stadium.

The film contains gun and physical violence, fleeting rear male nudity, a reference to nonmarital sexual activity, and fleeting rough and crude language. The Catholic News Service classification is A-III — adults. The Motion Picture Association of America rating is PG-13 — parents strongly cautioned. Some material may be inappropriate for children under 13.

NEXT: A ‘Blended’ surprise: Family movie without gross-out gags