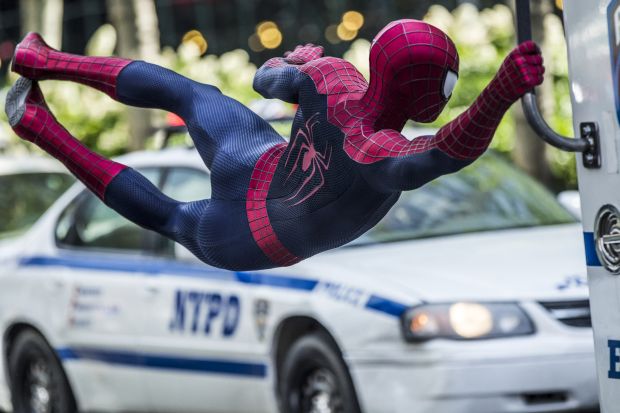 Andrew Garfield stars in a scene from the movie "The Amazing Spider-Man 2." (CNS photo/Sony)

NEW YORK (CNS) — Patrons are unlikely to walk away from the overstuffed but diverting 3-D comic-book sequel “The Amazing Spider-Man 2” (Columbia) feeling that they’ve failed to get their money’s worth. In fact, director Marc Webb’s follow-up to his 2012 reboot covers enough material for at least a movie and a half.

In doing so, the film showcases a good deal of mostly stylized mayhem that’s too intense for little kids. But the positive use to which the web-slinger — once again played by Andrew Garfield — puts his powers, together with a script that’s virtually free of objectionable vocabulary, makes this adventure acceptable for just about everyone else.

Garfield brings an appealing — and approachable — goofiness, both to his titular persona and to the superhero’s alter ego, average teen Peter Parker. Peter’s high school graduation provides the setting for some early scenes during which we see that Spider-Man is so busy protecting the people of New York that Peter misses his girlfriend Gwen Stacy’s (Emma Stone) valedictorian address and barely arrives in time to claim his own diploma.

Webb gives those viewers who may not have seen his earlier movie only a minimum of information about Spider-Man and how he got that way. He does let us know, via flashbacks, that Peter’s father (Campbell Scott) was a genetics researcher with uber-conglomerate Oscorp who, together with Peter’s Mom (Embeth Davidtz), disappeared under mysterious circumstances when Peter was still a small child.

Raised by his kindly Aunt May (Sally Field) and now-deceased Uncle Ben, Peter’s quest to learn the truth about his parents led to his being bitten by a genetically altered arachnid — with results familiar to every 4-year-old who cherishes a “Spidey” figurine.

While Peter’s initial conflict involved balancing his new powers with a concomitant sense of responsibility, he now struggles to reconcile the dangers of his mission with his desire to safeguard Gwen. Is there any way for him to do so short of parting with her forever?

Romantic troubles have to be put on the back burner, though, when a new foe for Spider-Man emerges in the person of Electro (Jamie Foxx). The confused victim of a power-grid accident at Oscorp headquarters, Electro angrily hurls bolts of his namesake form of energy hither and yon, disturbing the denizens of Times Square and testing even Spider-Man’s ability to contain him.

As Peter continues to probe the circumstances of his parents’ long-ago departure, he has a fraught reunion with his best friend from childhood, Oscorp heir Harry Osborn (Dane DeHaan). Afflicted with a fatal hereditary disease, Harry believes that Spider-Man can help to cure him, and he’s desperate to arrange a meeting with the wall-crawler.

Did we mention that there’s also a crazed Russian gangster named Aleksei Sytsevich (Paul Giamatti) in the offing?

Giddy special effects and a lively pace help pass the long running time and make the excess of storylines somewhat less noticeable. More substantially, moviegoers will appreciate Spider-Man’s knack for making the ordinary people he routinely rescues feel good about themselves. He thus not only battles evil but affirms and encourages goodness as well.

The film contains much action violence, including torture, a single crass expression and a mild oath. The Catholic News Service classification is A-II — adults and adolescents. The Motion Picture Association of America rating is PG-13 — parents strongly cautioned. Some material may be inappropriate for children under 13.

PREVIOUS: Moviemaking style makes ‘The Quiet Ones’ a disquieting thriller

NEXT: ‘Boxers & Saints’: Faith and rebellion in China