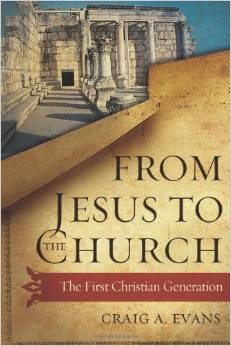 In “From Jesus to the Church,” Craig Evans explores the Jesus movement that developed within the Jewish religion after Christ’s death. The author raises the question of whether Jesus intended to begin a new religion and shows through extensive historical and scriptural sources how the church evolved during the first Christian generation.

Evans focuses on Jesus’ proclamation of the kingdom of God and of the failure of the ruling Jewish priesthood to establish God’s reign, oppressing the people through aristocratic rule and burdensome practices. Jesus announces himself as an “agent of redemption” for Israel, calling for reform and the establishment of a kingdom in which justice, mercy and love of others is the rule.

A major issue in the clash between Jesus and the priestly class had to do with the many prophecies concerning the destruction of the temple in Jerusalem. Jesus’ triumphal entry into the city as an influential and popular leader, combined with his open criticism of the temple establishment, put him on a collision course with the ruling priests.

The temple symbolized the leadership, but as Evans points out, the rulers had forgotten the true meaning of the building, found, for example, in Isaiah’s words that describe the temple on God’s mountain, the capital of the world where all peoples would be welcome: “a house of prayer for all people.”

Jesus calls the leadership a “den of robbers,” the unworthy caretakers of God’s vineyard and also refers to Jeremiah’s prophecy of the judgment and destruction of the temple. He is arrested on the charge of threatening to destroy the temple, the implication being that he is judging the priests and working toward their downfall.

After Jesus’ death Stephen also is accused, falsely, of “speaking words against this holy place and the law.” Stephen answers that accusation by quoting Scripture: “The Most High does not dwell in houses made with hands.”

At one point Paul is also charged with attempting to desecrate the temple by bringing gentile converts into it, thereby defiling the holy place. The author points out that Paul uses temple imagery in referring to James and Peter as “pillars” of the Jesus movement. This same symbolism was used by the community that left the Dead Sea Scrolls and by the Qumran group, which saw itself as a spiritual temple.

The book shows that during the first 40 years, the Jesus movement, known as “the Way” was seen as a Jewish reform community that provided money, goods and healing to those in need. After Peter, James, “the brother of Jesus,” became the leader, remaining in Jerusalem for 30 years, attempting to please both the Jewish church and Paul’s gentile converts.

For 15 years, Evans states, there was little distinction between the “ecclesia” of Christians and the Jewish synagogues. Even 80 years after Jesus’ death, Ignatius refers both to the church and the synagogue interchangeably. Although Paul spread the Gospel to growing numbers of gentiles, he wrote of Israel as the chosen people upon whom “a spiritual obduracy has come,” but only temporarily “until the full number of gentiles come in.”

Evans shows that the destruction of the temple in 70 C.E. (the Common Era) ended the aristocratic Jewish priesthood, and that the Jesus movement remained within the Jewish religious world until the end of the first generation. The ultimate Jewish/Christian rift was the result of the spread of gentile membership, disagreement about Jesus’ divinity, the preference for Greek scriptural texts, the loss of the state of Israel, and the failure of Jesus to free Israel from Roman rule.

The book is well documented and provides insight into both the political and spiritual issues of the time.

Sister Mona Castelazo, a Sister of St. Joseph of Carondelet, has taught English for many years in Los Angeles. She is the author of “Under the Skyflower Tree: Reflections of a Nun-Entity,” published by iUniverse.

NEXT: Players feel fog of war in new video game