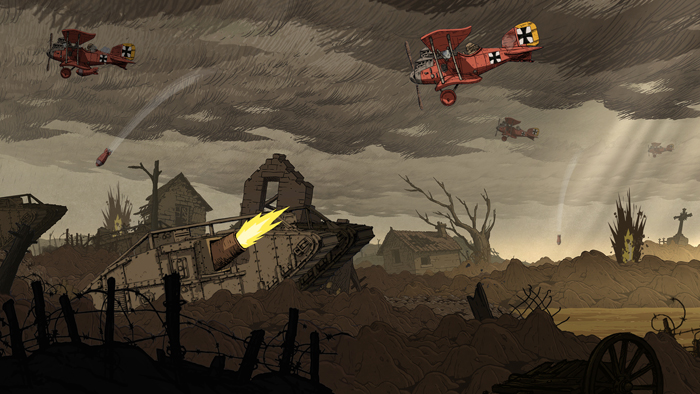 This is an image from the video game "Valiant Hearts: The Great War." The Catholic News Service classification is A-II -- adults and adolescents. The Entertainment Software Rating Board rating is T -- teens. (CNS/Ubisoft) 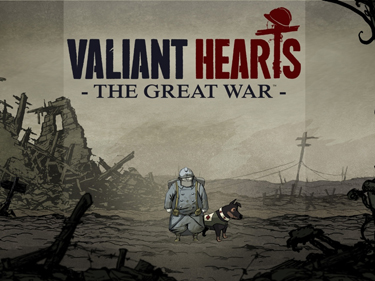 NEW YORK (CNS) — A video game in which a character is introduced, tutored in combat, then quickly knocked out cold and captured by the enemy would usually be considered a failure. But then, “Valiant Hearts” is no ordinary title.

Just out from Ubisoft, the game is set during World War I. Players follow several characters through the global, four-year conflict that began almost exactly a century ago: Karl, a German civilian living in France; Emile, Karl’s father-in-law, who is drafted into the French Army; Anna, a Belgian-born nurse stationed in Paris; and Freddie, an American mercenary solider.

“Valiant Hearts” is free of sexual content. But it does include a degree of violence that makes it unsuitable for young children.

On the other hand, this captivating game could be a wonderful tool for educating teens and sparking historical discussions between them and their parents. And the mayhem that is on display is never gratuitous or sadistic. Rather, it constitutes a moving depiction of the filth and fury of trench warfare as well as a forceful reminder of war’s tragic pointlessness.

Fittingly, though there are comic touches to the narrative, the overall tone is serious, even somber. The music is melancholy and beautiful.

“Valiant Hearts” is technically a puzzle and adventure game. Players need to complete certain tasks to move forward. On paper, these challenges seem a bit dull: assembling parts for machines, cutting barbed wire, throwing bombs to clear debris or to get to a machine gun nest.

You can also aid a comrade by giving him helpful items like clean socks. In exchange, he’ll give you something you need in order to advance.

What makes the game exciting and terrifying are the battle sequences which come after you’ve solved a puzzle. A constant, relentless flow of soldiers streams around you, charging ahead into bombs and gunfire and hopefully on to victory — the nature of which, as in the real-life struggle, is never clearly defined.

At intervals there are useful pop-up windows with text and photographs that explain the chronology and the various forces as well as their strategies for winning.

The absolutely top-notch animation in “Valiant Hearts” is especially noteworthy — not just in gaming terms such as pixels and clarity, but as art. The rolling fields of France are lush with greens and browns. The trenches are accurately dismal.

“Valiant Hearts” offers a real challenge to the electronic entertainment industry, which is overflowing with hardcore violence and explicit adult content. Here is a game that achieves a high level of artistry, is fun to play and informative — especially in showing the real-world effects of hapless men coming up against machines designed to kill.

Paradoxically, the decision to make “Valiant Hearts” look like a cartoon adds gravitas, in the same way that Art Spiegelman’s Pulitzer-Prize winning work “Maus” used the comic-book format to add pathos to the Holocaust.

Played for review on PC; also available for XBox and Sony consoles.