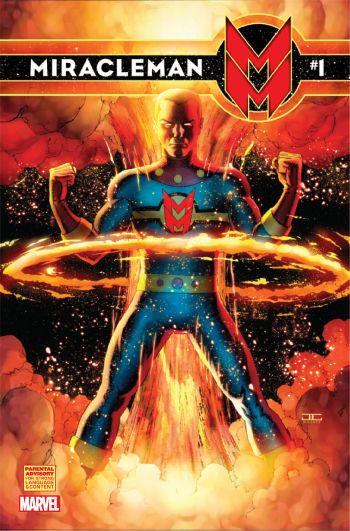 NEW YORK (CNS) — “Miracleman,” a 1980s British comic currently being reissued by Marvel, was an attempt at deconstructing superhero cliches. Violent and depressing, the series tells a story that’s often as dated and hackneyed as the Superman tropes it seeks to dismantle.

It’s too graphic and sexualized for young readers, and too weird and overwrought for older ones.

The title character first appeared in the 1950s, as a British version of DC Comics’ verbally self-transforming Shazam; Miracleman’s own magic cue being “Kimota!” Three decades later, the property was revived by Alan Moore, an eccentric English writer who would go on to create the celebrated graphic novel “Watchmen.” Moore’s exalted reputation among fans may account for the deluxe reissue of this earlier work.

In Moore’s version, Miracleman’s alter ego, a reporter named Mike Moran, discovers that his entire origin story is a sham.

“Miracleman” was considered groundbreaking when it first came out, and its ballyhooed reissue — both in comic and deluxe hardback form — implies that a serious work of art has been unearthed. But the themes of “Miracleman” were, and are, nothing new.

The image of the government as a shadowy manipulator of people and events was widespread in the popular culture of the 1970s, a decade before the revamped “Miracleman” appeared. As for conflicted heroes, they go back at least to film noir — even, arguably, to the Bible.

Over the past 20 years, of course, the brooding comic-book antihero has become a staple, from a dour Batman to the confused and conflicted Superman of the recent film “Man of Steel.”

A lot of the writing in “Miracleman” is downright awful: “The crackling darkness rolls toward them across the sky, like a great black bull, stupid with pain, its flanks pierced by silver darts.” “They are titans, and we will never understand the alien inferno that blazes in the furnace of their souls.”

Moore tries to show profundity by quoting Nietzsche on the superman. But bringing up the German philosopher — who was a gifted prose stylist if a questionable thinker — just serves to emphasize the weakness of Moore’s own authorship.

At one point, the writing was taken over by Neil Gaiman, who went on to become a best-selling novelist. But — perhaps because he was considerably younger at the time — Gaiman doesn’t fare much better than Moore.

Among other dubious content, the series includes a very explicit rendering of childbirth when Miracleman’s son is born. It was a controversial scene when the comic first ran, and remains in poor taste today.

Despite its title and its new publisher, “Miracleman,” alas, is no marvel.

PREVIOUS: Cooperation and conflict arise in ‘Planet of the Apes’ sequel

NEXT: Demanding history of Roman empire could have filled three volumes