Cooperation and conflict arise in ‘Planet of the Apes’ sequel 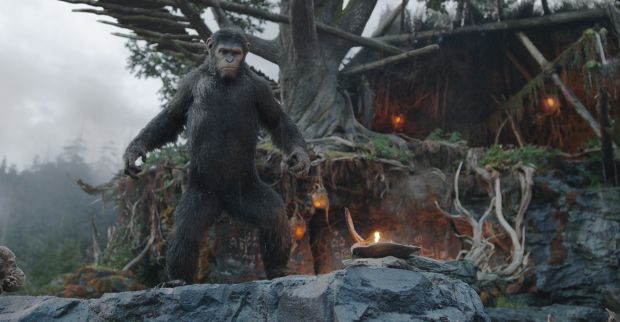 Caesar, voiced by Andy Serkis, appears in the movie "Dawn of the Planet of the Apes." (CNS photo/Fox)

NEW YORK (CNS) — Those super-sentient simians are back in “Dawn of the Planet of the Apes” (Fox).

Though it’s not a film for kids, this latest addition to a franchise based on the work of French science-fiction author Pierre Boulle (1912-1994) has enough going for it to please most adults. Grown-ups also will find the themes underlying director Matt Reeves’ 3-D follow-up to the 2011 reboot “Rise of the Planet of the Apes” congruent with Christian values.

A decade after a pandemic called Simian Flu wiped out most of the human race, a band of survivors — led by a former law enforcement official named Dreyfus (Gary Oldman) — occupies the ruins of San Francisco. With their fuel supply running dangerously low, they send out an expedition aimed at restoring a damaged hydroelectric plant to the north of the city.

If this peaceable duo represents the best of their respective species — each is shown to be motivated by concern for his family — the other end of the spectrum is embodied by Caesar’s aggressive deputy Koba (Toby Kebbell) and Malcolm’s irascible colleague, Carver (Kirk Acevedo). Koba was a victim of torturous lab experimentation, while Carver holds the apes responsible for the ravages of Simian Flu.

Via these positive and negative role models, Reeves blends pleas for tolerance and trust in with the considerable, though largely bloodless, combat action. While thoroughly honorable, the script’s messages are delivered somewhat heavy-handedly. Still, Serkis’ striking performance, together with top-notch special effects, elevates Reeves’ sequel above run-of-the-mill entertainment.

The film contains frequent stylized violence, at least one use each of profanity and rough language as well as several crude and crass terms. The Catholic News Service classification is A-III — adults. The Motion Picture Association of America rating is PG-13 — parents strongly cautioned. Some material may be inappropriate for children under 13.

PREVIOUS: ‘Deliver Us From Evil’ dances gingerly with the devil

NEXT: Marvel’s ‘Miracleman’ hard to believe