Movie review: And So It Goes 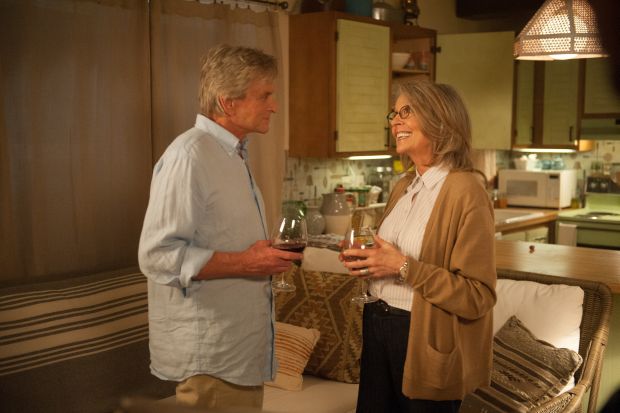 Michael Douglas and Diane Keaton star in a scene from the movie "And So It Goes." (CNS photo/Clay Enos, Clarius Entertainment)

NEW YORK (CNS) — The indignities of romance in one’s 60s entwine with a mortifyingly weak and implausible script for two aging actors in “And So It Goes” (Clarius).

Michael Douglas, who plays grumpy widower and real estate agent Oren, and Diane Keaton as lissome widow and aspiring singer Leah, are engaging as they go through their paces. It’s just that director Rob Reiner and screenwriter Mark Andrus have nothing new to say about either the vicissitudes of aging or the need to connect with family members.

It’s a mostly moral story told in the style of a “family” film, although so weakly, its intended audience isn’t even clear. Adults won’t mind it. Anyone under the age of 20 probably won’t be interested.

In leafy Fairfield, Connecticut, Oren, whose wife died 10 years ago, has been trying to sell his mansion for $8.6 million, but has found no takers, in part because of his occasional racial insensitivity. He’s staying in a small apartment building he owns, along with Leah, whose late-life singing career stalls because she bursts into tears whenever she mentions her dead husband and the love they shared.

Into this comes Oren’s son, Kyle (Austin Lysy), with a granddaughter, Sarah (Sterling Jerins), that Oren didn’t even know he had. Kyle fathered the girl, who’s about to turn 10, back in his drug-addiction days. He’s about to serve a jail term — not for narcotics, but on a trumped-up charge related to his boss being investigated for insider trading.

Oren makes a single attempt to return Sarah to her junkie mother, an episode that seems tacked on. More troubling, Oren makes no attempt to get the woman into any kind of rehab program. Once her addiction is evident, he simply takes Sarah away.

Formula takes over after this. Sarah teaches her caustic granddad the importance of compassion. This, in turn, helps him come up with a way to set Leah’s singing on a more lucrative path, and Oren and Leah both stumble into the perils of a physical relationship.

Ambling, philosophical stories about adult romances in pretty settings can be enjoyable. But here, the philosophy is reduced to wisecracks and the ambling obstructs reality. Fairfield, however, has never looked lovelier.

The film contains implied premarital sexual activity, a scene of childbirth, a few uses of profanity and fleeting crass language. The Catholic News Service classification is A-III — adults. The Motion Picture Association of America rating is PG-13 — parents strongly cautioned. Some material may be inappropriate for children under 13.

NEXT: ‘Lucy’: A wild ride that gets smart