‘Lucy’: A wild ride that gets smart 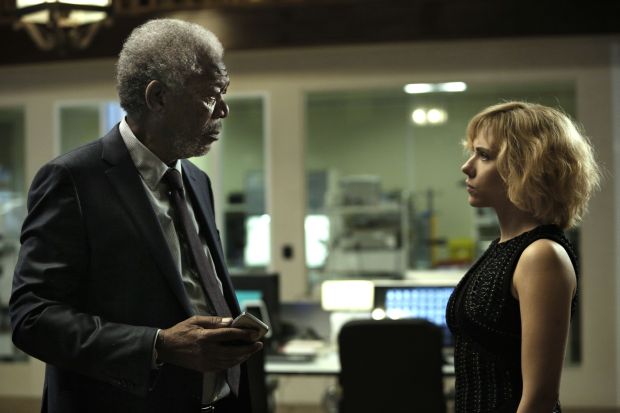 NEW YORK (CNS) — No one can accuse French writer-director Luc Besson of having made a dull film in “Lucy” (Universal).

But giddy sci-fi notions pepper his bizarre action thriller, while harsh events unfold amid its gritty setting, making this breakneck outing a suitable ride only for those grown-ups with seasoned judgment.

It’s a safe bet that nothing good is going to happen to the streetwise but impressionable waif of the title once Lucy’s boyfriend, Richard (Pilou Asbaek), tricks her into delivering a briefcase with unknown contents to a recipient he’s clearly afraid to face. So it’s no surprise when the case turns out to hold a large quantity of a cutting-edge narcotic belonging to brutal Taiwanese crime lord Mr. Jang (Choi Min Sik).

Though the initial transfer of the drug is harrowing enough, worse is to follow: Beaten unconscious, Lucy (Scarlett Johansson) wakes up to find that a portion of the crystalline substance has been implanted in her, and that she’s being compelled to serve as one of Jang’s beleaguered crew of unwilling mules.

Held in captivity pending her departure, Lucy is accidentally exposed to the influence of her cargo when one of Jang’s henchmen, whose advances she’s repelled, responds by putting her through another drubbing. The startling result is that, rather than merely getting high or even overdosing, Lucy rapidly begins using more and more of her brain’s untapped capacity for thought.

This process of intellectual expansion not only enables Lucy to escape, but keeps her several steps ahead of the pursuing bad guys, led by Jang’s underling Jii (Nicolas Phongpheth). While they’re intent on recovering their product — and punishing the runaway — Lucy is determined to turn her unique experience to the benefit of science.

To that end, she uses the Internet to locate Professor Norman (Morgan Freeman), one of the world’s leading experts on the subject of evolutionary consciousness. Scenes of Norman lecturing on his chosen topic have earlier been interspersed, somewhat mysteriously, with the sequences recounting Lucy’s mounting misfortunes.

Religiously dedicated moviegoers will appreciate the brief but fervent prayer Lucy offers up once she realizes that she’s fallen into Jang’s clutches. They’ll be more ambivalent about her encounter with her namesake, the earliest ancestor of the human race from whom, scientists surmise, all subsequent homo sapiens descend.

During their meeting, the two reach out, finger to finger, in a gesture strongly reminiscent of the iconic one shared between God and Adam on the ceiling of the Sistine Chapel. Is this a Darwinian redrawing of Michelangelo’s familiar image of creation? Or are we to infer that Lucy’s ascent to some version of omniscience makes her a stand-in for God?

Plot details also call for careful sifting. As Lucy approaches intellectual totality, she gains the ability to control the material world. From a Christian perspective, of course, that’s an off-kilter portrayal of the relationship between thought and matter. Lucy’s ever-deepening insights into the nature of things, moreover, have more to do with a sort of low-rent Zen Buddhism than with revealed religion.

These philosophical factors, together with a steady stream of nasty mayhem, suggest a wary stance toward “Lucy” would be best, even for adults.

PREVIOUS: Movie review: And So It Goes