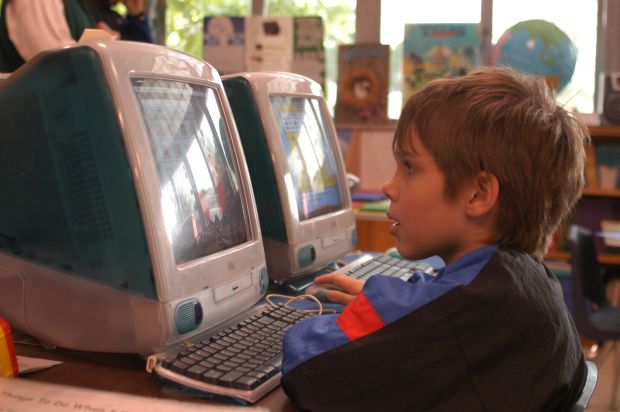 Ellar Coltrane stars in a scene from the movie "Boyhood." (CNS photo/IFC Films)

NEW YORK (CNS) — To describe “Boyhood” (IFC) as unique is to underestimate a film that was shot in 39 days over the course of 12 years.

For this reason alone, “Boyhood” offers an unprecedented cinematic experience. In this green-screen era of computer-generated effects, it’s refreshing, even astonishing, to watch characters age naturally — if not gracefully — on the big screen.

Writer-director Richard Linklater (“Before Midnight”) sets out to chart “the rocky terrain of childhood” as no one has done before. As such, “Boyhood” has a documentary feel, and brings to mind Michael Apted’s “Up” series, which checks in with the same participants every seven years.

But “Boyhood” is a work of fiction, and its tone of moral indifference ultimately will not resonate well with viewers of faith — or with those who cherish the loving bonds of family.

At its heart is Mason Jr. (Ellar Coltrane). We meet him as a perfectly ordinary 6-year-old boy in suburban Texas, and then follow his life to age 18 and his departure for college.

Along for the ride are his spunky sister, Samantha (Lorelei Linklater, the director’s daughter), and his divorced mother, Olivia (Patricia Arquette). The lad’s father, Mason Sr. (Ethan Hawke), is an occasional presence.

Olivia is restless and insecure. She wants more out of life than being a mother, and uproots her family multiple times as she searches for a career and a new husband.

Mason Sr., on the other hand, is footloose and fancy free. He indulges his children whenever he sees them (which is not often), dispensing dime-store advice.

When Mason Jr. throws gutter balls at the bowling alley, upset that there are no bumpers in his lane, Dad tells him to grow up. “You don’t need bumpers. Life doesn’t give you bumpers.”

Divorce looms large in this movie, as children are forced to deal with their parents’ inadequacies and their opposing methods of parenting, a situation made all the more challenging when Mom remarries (twice), and Dad finds another wife.

In the end, the children essentially raise themselves, and decide on their own what is right and wrong.

This is where “Boyhood” falls short. The film is critical of Olivia’s poor taste in men (both of her new spouses are abusive alcoholics) as well as Mason Sr.’s narcissism. But when it comes to the bratty kids, judgment is suspended.

Mason Jr.’s journey is presented to the audience as perfectly natural, even normal. We watch him drink beer in middle school, and smoke pot and have sex in high school.

He is lazy, indifferent and rude, marching to his own drummer despite the protestations of his mother and teachers. In the end, he is an admired figure, possessing a “wisdom” that seems beyond his years.

While many viewers may identify with Mason Jr.’s experience, that does not make his actions morally acceptable.

Not surprisingly, “Boyhood” has no time for religion, even when Mason Sr. marries a sweet lady from the Bible Belt who manages to reform his freewheeling ways. Her gun-toting parents give Mason Jr. a Bible for his birthday, played as a cringe-worthy moment.

Samantha laments, “You’re not becoming one of those God people, are you Dad?”

The film contains a benign attitude toward drug and underage alcohol use, teenage sex, and contraception, an ambivalent portrayal of religion, occasional profanity and frequent crude language. The Catholic News Service classification is L — limited adult audience, films whose problematic content many adults would find troubling. The Motion Picture Association of America rating is R — restricted. Under 17 requires accompanying parent or adult guardian.