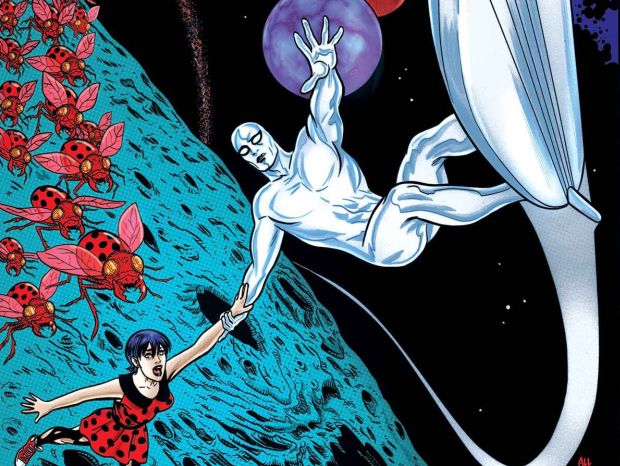 This is a detail from a page in the comic book series "Silver Surfer." (CNS/Marvel)

Allred’s art is unlike that of anyone else working in the genre. With his glossy and rubbery pop-art style, Allred seems to have drawn inspiration both from comics giant Jack Kirby and from the palette of a pack of Starburst. Allred is also a master of dynamic sequential art, the skill of arranging and shaping comic-book panels in an original and forceful way.

These talents make Allred a natural for Silver Surfer, a character Marvel has just rebooted. This chrome-white “sentinel of the spaceways,” roams the universe on a surfboard, encountering interesting people and alien civilizations — which for him, of course, include those found on earth. It’s a cosmic canvas that allows Allred to let his imagination run wild.

There is no red-flag content or objectionable material in “Silver Surfer” so far. The cautionary Marvel rating (T + — appropriate for teens 13 and older) may reflect the suitable audience for future installments.

The stories in this iteration of “Silver Surfer,” written by Dan Slott, are very arch and self-referential, almost an ironic commentary on the nature of comics themselves.

Characters can be sarcastic about the putative dangers they face; they even joke about the “Power Cosmic” wielded by the Surfer. Once seen as a fearsome threat, it’s now discounted. Thus, while children will love the art, they might not get the “meta” tone of the narrative.

By contrast to Allred’s contribution, Slott’s story and dialogue turn out to be real drawbacks.

Silver Surfer began in the late 1960s as one of Marvel’s most compelling, spiritual and Shakespearian heroes. Once an astronomer named Norrin Radd, the Surfer gained his new persona when his home planet of Zenn-La was threatened by a world-devouring alien called Galactus.

In exchange for the sparing of Zenn-La, Radd became Galactus’ herald; his job was now to search out new planets for his master to consume. In order to carry out this mission, Galactus endowed his minion with a tiny portion of his own characteristic attribute, the aforementioned “Power Cosmic.”

Eventually the Surfer came to earth. Moved by its majestic beauty and the amiability, courage, and love of the people he met, he turned on Galactus and protected humanity from destruction.

In his first appearances, the Surfer’s rhapsodic soliloquies about the natural glories of earth were biblical in their love of creation. An alien, he was nonetheless befriended by a blind woman named Alicia Masters, an incident that echoes the parable of the good Samaritan.

That was all years ago, however. In the new version, Radd is no longer tethered to Galactus. Instead he’s a kind of cosmic goodwill ambassador, stopping by planets to help civilizations in need.

One such world is the Impericon. Resembling a planet-sized tangle of Lego parts and bubble gum, the Impericon is run by a multi-eyed creature called the Incredulous Zed. With Zed’s realm in danger from an impending cosmic threat, the Surfer has to ride into action.

Helping Radd’s alter ego is Dawn Greenwood, a young girl from Anchor Bay, Massachusetts. There are twists and turns — both literal and figurative — and at the center of everything is one of Marvel’s weirdest figures: Eternity, who contains the consciousness of every living thing in the universe.

“Silver Surfer” rarely has a page laid out in traditional comic-book style. Story boxes and circles are constructed in a kinetic mix that propels the story forward and draws out the emotions of the characters.

When Dawn Greenwood is teleported to the Impericon, for instance, the walls in her bedroom transition to the walls of an Impericon prison. Another lovely sequence has panels that slant at a sharp diagonal angle, mirroring the trajectory of the Surfer as he plummets to earth.

It’s incredibly rich, eye-popping stuff. If only the story were equally strong.

NEXT: High in the Andes, Peruvian artisans create sacred art