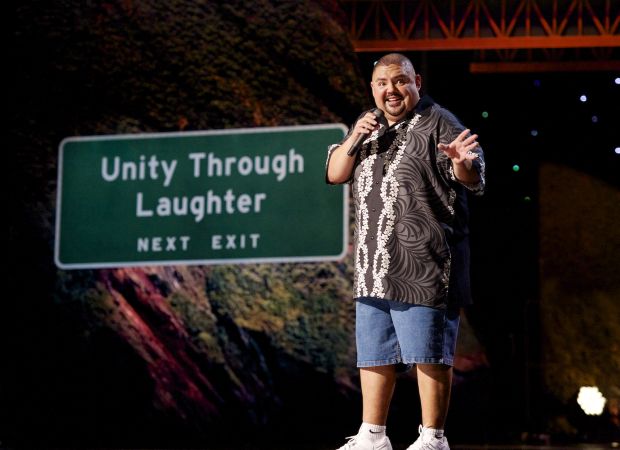 NEW YORK (CNS) — Like Bill Cosby, Gabriel Iglesias tells stories, not jokes. In “The Fluffy Movie” (Open Road), the rotund Mexican-American comic, whose tales are as soft around the edges as the man himself, shares engaging accounts of weight loss and the difficulties of being the stepfather of a teenage boy.

Not a lot happens in Iglesias’ anecdotes, filmed during a concert appearance in San Jose, California, by director Manny Rodriguez. He aims to get appreciative nods with his laughs, whether discussing his shedding of a hundred pounds after he became diabetic, the vagaries of driving during his recent tour in India, or the effort to explain to his privileged stepson, Frankie, how 1980s video games sometimes required mechanical skill.

Just 16, Frankie also has no idea how collect calls from pay phones used to work. The trick, his stepdad explains, lay in talking fast enough to insert a message when identifying yourself; in this case so Iglesias’ mother, on the other end, could duck having to pay the toll. “That was ghetto texting!” Iglesias cracks.

A visit to the “Center for the Morbidly Obese” ends in failure when Iglesias learns that gastric-band surgery won’t work for him. So he switches to a low-carb diet.

All of this leads up to his most gripping routine — actually, a pair of interlocking routines — in which he talks about seeing his father, a singer in a mariachi band, for the first time in 30 years, along with the sudden reappearance of Frankie’s biological dad.

Iglesias doesn’t trade in mordant jabs or lachrymose bitterness. He quietly tells the truth, and trusts that his audience — which is shown as encompassing all generations and ethnicities — will accept it.

The film contains a few references to sexuality and fleeting crude language. The Catholic News Service classification is A-III — adults. The Motion Picture Association of America rating is PG-13 — parents strongly cautioned. Some material may be inappropriate for children under 13.

PREVIOUS: ‘Hercules’ is, in a word, strong

NEXT: ‘Silver Surfer’ reboot an exercise in planetary pop art