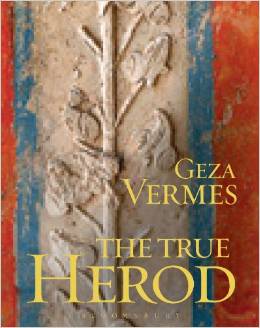 Published posthumously, Geza Vermes’ “The True Herod” begins with a foreword by his wife, Margaret. A Jewish scholar, Vermes put out a pioneering study of Jesus the Jew in 1973 and significant work on the Dead Sea Scrolls and Jewish history in the time of Christ.

Here he revises the traditionally negative views of Herod of both Christian and Jewish history. The book is illustrated with photographs of pertinent archaeological discoveries, maps and historical charts. These help to visualize the complex history of Herod’s family and its relations with Hellenism and later Roman rule.

Vermes begins with a summary of biblical history from King David through the Maccabean period, setting up the life and times of Herod, king of the Jews, from 73 BCE to four years after the birth of Christ. We learn why Greek was the language of the New Testament, and Aramaic the language spoken in Judea and Samaria, the language Jesus himself most likely spoke.

Herod is described as being virtually schizophrenic. On the one hand, he could be ruthless when seeking to gain and consolidate power, even murdering members of his own family. On the other, he was an astute politician, carefully siding with the winning figures in the internal battles within the Roman empire of the time, thus preserving and indeed increasing the size and influence of the Jewish state within the empire.

Vermes, citing the works of ancient historians such as Josephus and available archaeological evidence, portrays a king who personally observed Jewish law, the commandments described in the Pentateuch, and encouraged their observance by the Jewish people in his realm.

He was thus greatly favored by the Pharisees, who taught, as did Jesus, that the Jews, as a people in covenant with the one God of Israel, should respect and obey the law of God given to them as interpreted by the Hebrew prophets. He emphasized, as did the prophets, caring for those in need, feeding the poor, as well as observing the ritual laws required of those who would offer sacrifice in the Temple.

Herod was also a great builder, using wealth gained from taxing the rich to rebuild and enlarge the Jerusalem Temple, and to build a fortress city on Masada, a great seaport at Caesarea, and a new city, Herodium, south of Bethlehem. This employed many workers, spreading prosperity throughout the land. He even endowed the Olympic games of the time, enabling them to continue until 385 C.E. (the Common Era).

Herod is vilified in Christian tradition, based on the account in Matthew, for murdering innocent children upon hearing the prophecies of the Magi. This, Vermes convincingly argues, is historically unlikely. It reflects rather Matthew’s theology, understanding the life of Jesus as recapitulating the exile and enslavement of the Jews in Egypt and their exodus to Sinai and the Holy Land, seeing Jesus as the new Moses leading the people to freedom.

Christian readers will find here new understandings of the Scriptures, both the Hebrew Scriptures and the New Testament.

Fisher is a professor of theology at St. Leo University in Florida and retired associate director of the U.S. bishops’ Secretariat for Ecumenical and Interreligious Affairs.

PREVIOUS: ‘When the Game Stands Tall’ gives reason to cheer

NEXT: Teen tearjerker ‘If I Stay’ slogs through the syrup