Teen tearjerker ‘If I Stay’ slogs through the syrup 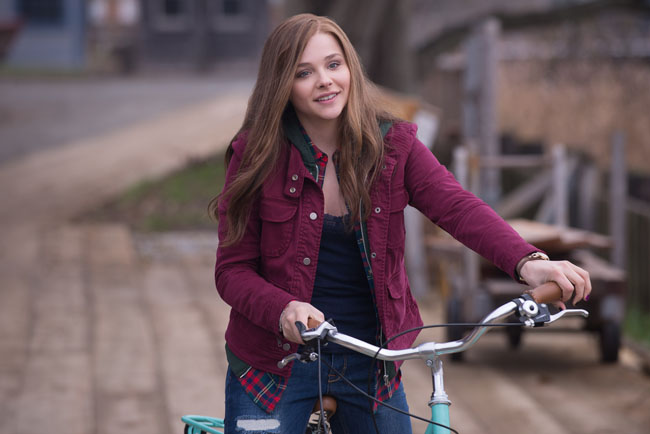 Chloe Grace Moretz stars in a scene from the movie "If I Stay." The Catholic News Service classification is A-III -- adults. The Motion Picture Association of America rating is PG-13 -- parents strongly cautioned. Some material maybe inappropriate for children under 13. (CNS photo/Warner Bros.)

NEW YORK (CNS) — A tearjerker for teens, “If I Stay” (Warner Bros.) glamorizes the physical relationship between its two leads, making it totally unsuitable for its target audience.

And it’s doubtful that many adult moviegoers, for whom it may be acceptable, will want to sit through this contrived, weepy film, adapted by director R.J. Cutler from Gayle Forman’s best-selling novel.

One of the pictures few assets is Chloe Grace Moretz’s game performance as Mia Hall, the “I” of the title. An aspiring cellist with a shot at attending Julliard, Mia — a native of Portland, Oregon — is busy worrying about how her possible departure for the East Coast has strained her bond with her rocker boyfriend Adam (Jamie Blackley) when her life takes a sudden, horrific turn.

Needless to say, an unconscious heroine simply will not do — on screen or on the printed page. So Mia has a convenient out-of-body experience, and takes us along for the ride.

As scenes around her hospital bed alternate with flashbacks, Mia must decide whether to fight for life to be reunited with Adam or follow her folks into eternity.

While screenwriter Shauna Cross’ script implicitly affirms the existence of an afterlife — a bright light seemingly beckons to Mia every so often — some of the memories we witness reveal attitudes in the narrative at odds with Scripture-based values. Thus Mia is delighted to learn that the backup singer in Adam’s band — a girl she sees as a potential rival for his affections — is a lesbian. And not a shy one, either, as a distantly viewed but enthusiastic kiss with her girlfriend promptly demonstrates.

More prominently, Mia initiates an encounter with Adam that, although discreetly shown, is presented as a wonderfully romantic experience for both of them. A later scene finds them together in Mia’s bed at home, suggesting that hipsters Kat and Denny are at ease with the situation.

Reflective viewers, of course, will not be so comfortable, especially given that Mia is a senior in high school, meaning that she may — or may not — be 18.

Although Mia’s real-life contemporaries may balk at being kept away from “If I Stay,” their guardians will at least have spared them such cringe-worthy moments as Adam’s impromptu ICU serenade to his still-sleeping beauty.

The film contains a benign view of teen sexuality and homosexual acts, nongraphic premarital — and possibly underage — sexual activity, a same-sex kiss, at least one use of profanity and considerable crude language. The Catholic News Service classification is A-III — adults. The Motion Picture Association of America rating is PG-13 — parents strongly cautioned. Some material may be inappropriate for children under 13.

NEXT: ‘The November Man’ offers little cause for thanksgiving