‘Let’s Be Cops’: One of those bad ideas from the start 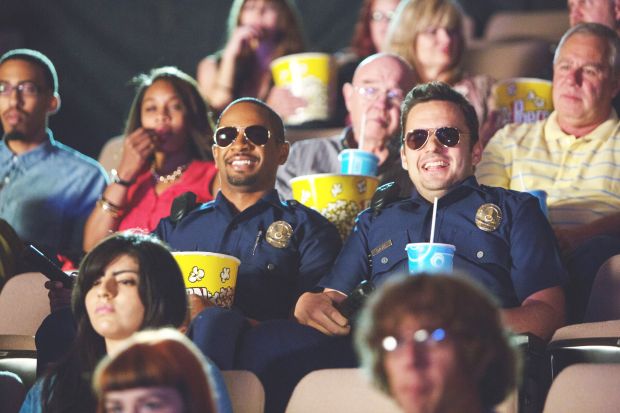 But this weak comedy’s combination of a farfetched premise, an obscenity-laden script and ill-advised forays into gross-out as well as kinky humor will fail to lighten the spirits of those few mature viewers for whom it can be considered somewhat acceptable.

The slackness is apparent from the start. Mistakenly believing that their college reunion is a costume affair, down-on-their-luck Los Angeles roommates Ryan (Jake Johnson) and Justin (Damon Wayans Jr.) show up for it dressed as policemen.

Noticing on their way home that their uniforms have suddenly make them magnets for the ladies, and that the passing citizenry obey their commands, the pals decide to carry on with their impersonation as a practical joke. The fact that Justin’s career as a video-game designer has stalled and that ex-football star Ryan, long ago sidelined by an injury, is essentially unemployed leaves the boys plenty of time to play dress up.

Things take a potentially deadly turn, however, when the two faux Po-Po cross Albanian-born crime lord, and neighborhood menace, Mossi (James D’Arcy). This move not only puts their lives in jeopardy, it also endangers Justin’s waitress girlfriend Josie (Nina Dobrev) and Officer Segars (Rob Riggle), a real cop who has fallen for Ryan and Justin’s act.

Friendship is put to the test as Ryan, who has gained a new lease on life via their masquerade, thwarts Justin’s sensible efforts to bring the whole business to a screeching halt.

Justin’s patience is further tried by two incidental characters. The first is a stark naked perp he and Ryan encounter while aiding Segars on the scene of a nighttime break-in. Crazed as well as inexplicably underdressed, the hefty would-be thief tackles Justin in such a way as to end up with his crotch in Justin’s face.

Then there’s the drug-addled nymphomaniac with whom Justin and Ryan cross paths when they commandeer her apartment as a vantage-point from which to surveil Mossi’s base of operations. Her repeated advances draw Ryan’s excited interest, but only succeed in annoying Justin.

As for Little Joey (Joshua Ormond), the youthful sidekick Justin and Ryan have acquired — Ryan met the lad while coaching — his presence on the scene only serves to make this particular interlude even less palatable.

Most of the running time is devoted to more seemly material. But the barrage of F- and S-bombs almost never falls silent.

The safest response to “Let’s Be Cops?” Let’s not and say we did.

The film contains much action violence with occasional gore, strong sexual content, including full male nudity and many bedroom-themed jokes, drug use, at least one instance of profanity, pervasive rough and crude language and a vulgar gesture. The Catholic News Service classification is L — limited adult audience, films whose problematic content many adults would find troubling. The Motion Picture Association of America rating is R — restricted. Under 17 requires accompanying parent or adult guardian.