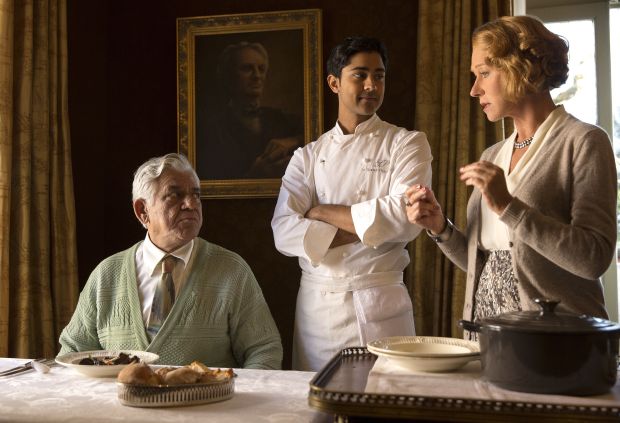 Om Puri, Manish Dayal and Helen Mirren star in a scene from the movie "The Hundred-Foot Journey." (CNS photo/Disney)

NEW YORK (CNS) — Like an airy souffle, director Lasse Hallstrom’s food-themed romantic fantasy “The Hundred-Foot Journey” (Disney) has an elegant appearance and a charming taste, but not much substance.

Still, there’s little to offend on any level in this adaptation of the best-selling novel by Richard C. Morais. So parents will probably find it acceptable for mature adolescents.

Picturesque, stately and thoroughly unrealistic, this is the story of the Kadam family, an Indian clan of restaurateurs. When political unrest results in the torching of their subcontinental establishment, they seek refuge in Europe, eventually settling — more or less by chance — in a small town in the French countryside. Cue the lush sunsets and Bastille Day fireworks.

The otherwise unnamed Papa Kadam (Om Puri) nurtures dreams of winning the local populace over to curry and cardamom. But the building in which he chooses to set up shop is directly across the road from the region’s most venerable eatery, a Michelin-starred haven of the rich and famous presided over by the formidable Madame Mallory (Helen Mirren).

At first, Madame Mallory has nothing but contempt for her new neighbors, and resorts to dirty tricks to try to undermine them. Marguerite (Charlotte Le Bon), one of Madame’s sous chefs, by contrast, adopts a more welcoming attitude once she connects — both professionally and personally — with Hassan (Manish Dayal), the principal cook among Papa’s progeny.

Recognizing that Hassan is prodigiously gifted, Marguerite gives him classic French cookbooks to help him expand his culinary horizons. Thus begins his spectacular rise into the stratosphere of haute cuisine.

As Madame Mallory and Papa continue to butt heads, and the divergent cultures they represent clash more generally, Marguerite and Hassan become the Romeo and Juliet of their mildly warring factions. But Hassan’s destiny beckons from the direction of Paris.

Young love, lavish foodstuffs, a conflicted protagonist. … As they say in New Delhi, what’s not to like?

Screenwriter Steven Knight’s mostly restrained dialogue — often pleasingly urbane, now and then cliched — veers into vulgarity only once by our count. And a somewhat suggestive scene finds Hassan, who was last glimpsed passionately kissing Marguerite, rearranging his clothes as the two emerge from the kitchen setting of their clutch.

Today’s teens, need it be said, will not be shocked by such proceedings. However, the descent of an arsonist rabble on the Kadam’s original place of business — an incident with fatal consequences — would likely prove a traumatic sight for real youngsters.

Characters occasionally mention “the gods” and refer, in passing, to their control of human affairs. But this amounts to no more than a turn of phrase and will leave even the impressionable unaffected.

Given all the onscreen feasting, on the other hand, mature viewers would be well advised to make reservations before they buy their movie tickets.

The film contains scenes of mob violence, implications of an intimate encounter and a single crude term. The Catholic News Service classification is A-III — adults. The Motion Picture Association of America rating is PG — parental guidance suggested. Some material may not be suitable for children.