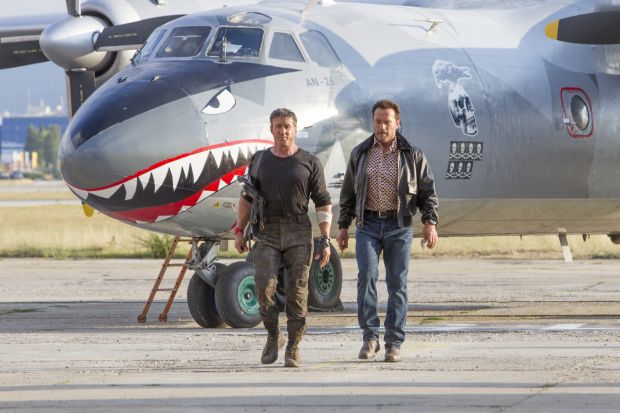 Sylvester Stallone and Arnold Schwarzenegger star in a scene from the movie "The Expendables 3." (CNS photo/Lionsgate)

NEW YORK (CNS) — There are many ways to keep yourself entertained while watching “The Expendables 3” (Lionsgate).

For instance, counting the wrinkles on the face of Stonebanks (Mel Gibson), the good guy-turned-war-criminal, during one of his many rants. Or marking off the minutes until Trench (Arnold Schwarzenegger) bellows, “We must get to the choppah!”

Eventually, the only remaining entertainment factor is to marvel at how director Patrick Hughes and screenwriters Sylvester Stallone, Creighton Rothenberger and Katrin Benedikt keep this second sequel’s shoot-’em-up formula, which harkens back to the 1980s, from crashing resoundingly onto the shores of ennui.

The new development in this Expendables adventure — which is, thankfully, considerably less gory than its predecessors — is the addition of a youthful new breed of monosyllabic action heroes to bolster the reliable geezers.

Early on, a weary Trench confesses to Barney (Stallone), “I’m getting out of this business — and so should you.” Well, not before a few last helicopter rides and machine-gun fusillades — as well as the valedictory blowing up of miscellaneous items.

Barney’s last mission to Somalia to break Doc (Wesley Snipes) out of prison didn’t go well and ended up with the near-fatal shooting of Caesar (Terry Crews). So Barney is ready to quit. But Drummer (Harrison Ford), his CIA boss, asks him to assemble a new crew to bring Stonebanks before justice at The Hague.

Barney and Napoleon (Kelsey Grammar) recruit flexible and muscular Luna (Ronda Rousey), Smilee (Kellan Lutz), Thorn (Glen Powell) and Mars (boxing champ Victor Ortiz). From then on, the only suspense is how long it will take for Barney’s old fighting team of Christmas (Jason Statham), Gunner (Dolph Lungren) and the always-reliable Trench to join them for the big showdown against Stonebanks in Romania.

For comedy relief, they’re joined by the talkative and eager Galgo (Antonio Banderas), and Drummer cracks wise while flying a copter.

It’s all slick, competent and sterile, as if its tropes had been perfected by mass-production techniques. The film has nothing new to say as it kills off anonymous bad guys over a period of 127 minutes.

“You’re only old when you surrender,” Mars announces in his introductory scene. Nah, you can be old without surrendering, and — unlike these performers — also retain some dignity.

The film contains frequent gun, knife and physical violence as well as numerous explosions, a few uses of profanity and pervasive crude language. The Catholic News Service classification is A-III — adults. The Motion Picture Association of America rating is PG-13 — parents strongly cautioned. Some material may be inappropriate for children under 13.

NEXT: Movie review: ‘The Giver’