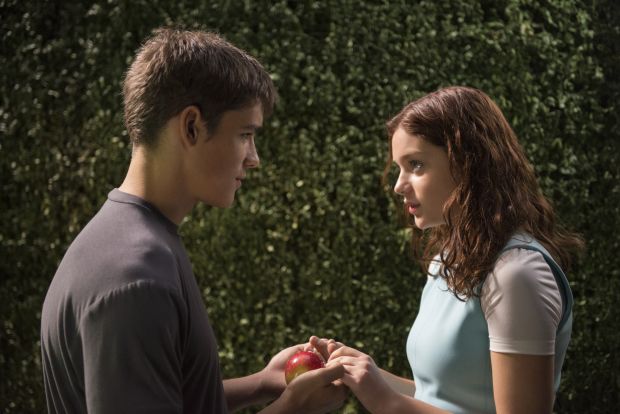 Brenton Thwaites and Odeya Rush star in a scene from the movie "The Giver." (CNS photo/courtesy The Weinstein Company)

NEW YORK (CNS) — Hollywood continues to makes the future a dangerous and challenging place to be a teenager.

Arriving on the heels of “The Hunger Games” and “Divergent” is “The Giver” (Weinstein), another futuristic thriller where young people find themselves running for their lives.

This time, however, the tone is softer, and the overall meaning more profound, with a welcome pro-life message that will resound with viewers of faith.

Directed by Philip Noyce (“Salt”), “The Giver” is based on the best-selling 1993 novel by Lois Lowry about a utopian world that, on the surface at least, is free from suffering, hunger, and violence. A daily injection of every member of “the Community” ensures that memories and emotions are suppressed, along with freedom, choice, individuality, religion — and temptation.

“When people have the freedom to choose, they choose wrong, every single time,” intones the Chief Elder (Meryl Streep).

Everything in this Orwellian world is identical and monochromatic: homes, clothes, even the family unit. Just two children per household, one boy and one girl, each genetically engineered and born to designated birth mothers.

When the children come of age, they receive their vocation, the role they are to play in the Community. The time has come for Mother (Katie Holmes) and Father (Alexander Skarsgard) to present their son, Jonas (Brenton Thwaites).

Sensing something unusual about the teen, the Chief Elder selects Jonas to inherit the esteemed position of Receiver of Memories, a kind of repository of the past, warts and all.

The current Receiver, known as the Giver (Jeff Bridges), is weary, shopworn, and ready to pass the baton. He’s haunted by the failure of a recent designee, Rosemary (Taylor Swift), and is determined to succeed with Jonas.

Like Yoda taking on Luke Skywalker, the Giver begins Jonas’ training, passing on memories of the “real” world.

Jonas is overwhelmed by newfound emotions and memories. He experiences love and happiness for the first time, but also cruelty, war and death — and all in glorious Technicolor. When the fog clears, he reaches an epiphany: without the knowledge of suffering, one cannot appreciate true joy.

“If you can’t feel, what is the point?” he asks. That belief is reinforced by his growing love for a fellow teen, Fiona (Odeya Rush), along with the Giver’s wisdom that “with faith comes love and hope.”

Jonas’ determination that everyone in the Community should share in his knowledge is accelerated when he uncovers a dark secret: the Elders sanction euthanasia to eliminate imperfect babies and the frail elderly.

Filled with outrage, he joins forces with the Giver to restore the proper balance to society.

There is a disturbing scene in “The Giver” involving euthanasia that may upset younger viewers. For mature teens and their parents, however, it can spark a necessary conversation about the sanctity of life at all ages, winningly endorsed by this worthy film.

The film contains mild action violence and a disturbing scene of euthanasia. The Catholic News Service classification is A-II — adults and adolescents. The Motion Picture Association of America rating is PG-13 — parents strongly cautioned. Some material may be inappropriate for children under 13.

NEXT: ‘When the Game Stands Tall’ gives reason to cheer