Movie review: A Walk Among the Tombstones 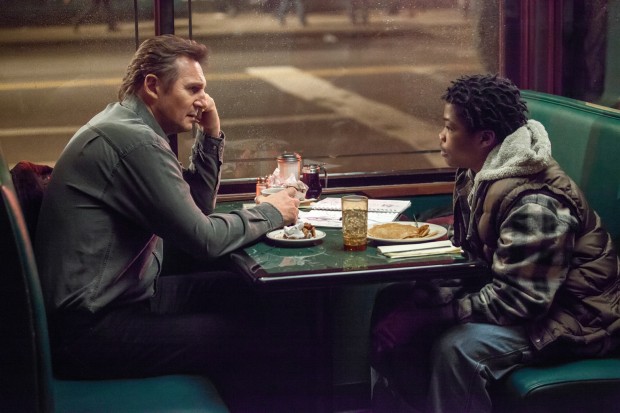 Liam Neeson and Brian Bradley star in a scene from the movie "A Walk Among the Tombstones." (CNS photo/Universal)

NEW YORK (CNS) — When a film is called “A Walk Among the Tombstones” (Universal), you shouldn’t expect a cheery stroll through the park.

Rather, this grisly thriller traverses the seamy underbelly of New York City in the 1990s, tracking a gang of serial killers on a deadly rampage.

Writer-director Scott Frank (“The Lookout”), working from the 1992 novel by Lawrence Block, serves up a well-acted and absorbing drama, albeit not one for the squeamish. There’s also an interesting moral conundrum, as the victims themselves are criminals, thereby posing the question, “Do bad guys deserve justice?”

This conflict haunts the hero, Matthew Scudder (Liam Neeson), a former NYPD cop who now works as a private investigator operating just outside the law.

He reluctantly agrees to help a prosperous heroin trafficker, Kenny (Dan Stevens, having traveled very far indeed from “Downton Abbey”). Kenny’s wife (Razane Jammal) was kidnapped, and although Kenny paid the ransom, she was found dead, dismembered, and stuffed in the trunk of a car.

Kenny wants revenge, but his privacy, too. He also fears for the lives of his fellow drug dealers, as the murderers (David Harbour and Adam David Thompson) have struck again.

Scudder agrees to help, deciding that some bad guys are worse than others. As he tracks the killers, he acquires a young sidekick, T.J. (Brian Bradley), a homeless boy and comics enthusiast who dreams of being a real-life superhero.

Awash in moral ambiguity, “A Walk Among the Tombstones” injects a degree of faith into the mix. As a recovering alcoholic, Scudder tries to apply the 12-step program of perseverance, forgiveness and belief in a higher power to his personal crusade for good over evil.

He does not always succeed.

PREVIOUS: ‘Calvary’ tells the truth of anger, hypocrisy — and love

NEXT: Inspired by Old Testament, ‘The Song’ a modern story of love, faith