Inspired by Old Testament, ‘The Song’ a modern story of love, faith 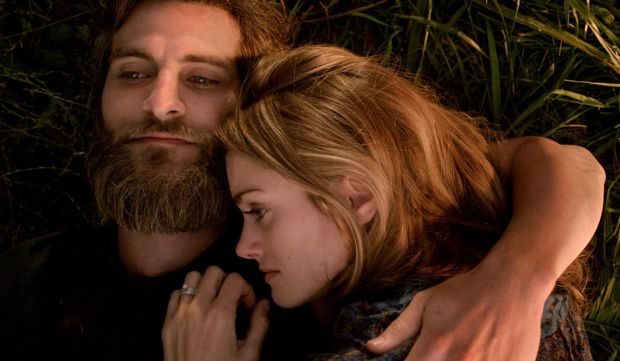 Alan Powell and Ali Faulkner star in a scene from the movie "The Song." (CNS photo/City on a Hill)

WASHINGTON (CNS) — The Song of Solomon, the amorous tale of two lovers contained in the Old Testament, has found reincarnation in a modern story of love and faith underscored by American folk music.

“The Song,” the first feature film from writer/director Richard Ramsey, tells the story of an aspiring singer/songwriter and his attempt to preserve his marriage amid a burgeoning music career and the fame that comes with it.

In a phone interview with the Catholic News Service, Ramsey called the film “a redemptive love story” based on the writings and life of King Solomon, the famed but flawed king of ancient Israel, and inspired by the Book of Ecclesiastes.

“The Song of Solomon speaks very powerfully to issues of romance and marriage and intimacy,” Ramsey said. “Ecclesiastes, I think, addresses an even more foundational issue of where the meaning in life comes from.”

In Catholic editions of the Bible, the Song of Solomon is called the Song of Songs. While the work is attributed to Solomon in the traditional title, biblical scholars think it was penned by an unknown poet.

Ramsey noted the parallel between the narrative of Ecclesiastes and the issues that have emerged in contemporary culture, namely the misguided quest by many people to ascribe meaning to their lives through everyday superficialities like work, education and material things.

“I think a lot of people are trying to find meaning and significance in those things … and it all ends up empty,” he said. “This film kind of gives a cautionary tale about the heartache that can come from trying to do that.”

Ramsey became inspired to make the film after reading Ecclesiastes, which he found had a particularly timely message, he said.

“The controlling idea of the movie, like Solomon says in Ecclesiastes is … be faithful to God, be faithful to your spouse, that’s where meaning and fulfillment lie,” he said.

As for resurrecting a 3,000-year-old story and applying it to the modern era, Ramsey said there were “fun challenges.”

“When you have spiritual and religious, specifically Christian, themes in a movie … how do you have that there but still keep the movie story-driven rather than message-driven? I feel like we succeeded in that,” Ramsey said. “As far as adapting the story to today, it’s just a matter of finding … the modern parallel. What are the idolatrous attitudes we have today about sex or about meaning or those various things that Solomon addresses?”

Tony Young, executive director of City on a Hill production studio in Louisville, Kentucky, where “The Song” was made, said the studio’s main focus in making the movie was to serve as a teaching point. He cited Pastor Kyle Idleman, the teaching pastor at Southeast Christian Church in Louisville who also works with the production studio, as one of the main reasons for the movie’s biblical theme.

“Kyle always had a heart for teaching Song of Solomon,” he said. “He feels that in large part the church doesn’t have that discussion a lot, you know God’s plan for love and sex in a marital relationship.”

Young said the studio’s approach in producing this “music-driven love story” was to create a film that was “more conversational than conversional.”

“Our goal is to create a new genre within faith film … that opens up conversations and dialogue around this teaching subject.”

“The Song” will be released nationwide Sept. 26.

The film’s soundtrack, which Ramsey described as “Americana alt-folk country,” also plays a large role in the story, he said.

“(The music) has a raw authentic sound and it also has a sound that (allows people to) sing about God and spiritual things in a way that audiences, even mainstream music audiences, appreciate,” he said.

Ramsey said the movie has a realistic and accessible depiction of marriage that he thinks will attract both religious and nonreligious audience members.

“There are metaphors going on but there’s also a very … relatable love story going on at the same time,” he said. “I just hope it sparks conversation. Anyone who’s willing to sit with an open mind and listen to the story and watch the story and take it to heart, that’s who I’m talking to.”

PREVIOUS: Movie review: A Walk Among the Tombstones

NEXT: Movie review: The Maze Runner