Movie review: As Above, So Below 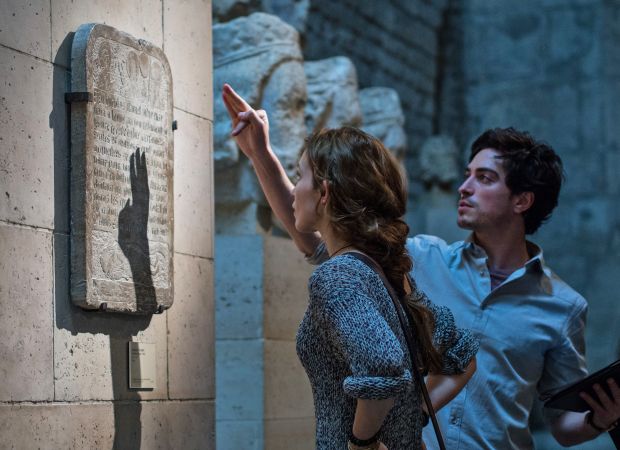 Perdita Weeks and Ben Feldman star in a scene from the movie "As Above/So Below." (CNS photo/Bruno Calvo, Universal Pictures)

NEW YORK (CNS) — Claustrophobics beware: Set mostly in the network of catacombs that lie beneath Paris, the second-rate chiller “As Above, So Below” (Universal) is not the film for you. Gory images and an excess of hysteria-induced swearing put director and co-writer John Erick Dowdle’s jolt-fest off limits for many others as well.

Dowdle, who collaborated on the script with his brother Drew, gets things going with some Dan Brown-style alternate history. Following in the footsteps of her distinguished father, plucky, British accented archaeologist Scarlett (Perdita Weeks), an expert on the pseudo-science alchemy, is out to find the holy grail of alchemists everywhere, the legendary philosopher’s stone. This supposedly miraculous artifact has the power to turn base metals into gold and to impart eternal life.

The fact that Dad may have been driven mad by his pursuit of it — he ended up hanging himself — fails to deter Scarlett.

A variety of clues involving medieval-era Parisian Nicolas Flamel lead Scarlett to conclude that the object of her quest is hidden in those aforementioned tunnels — which, by the way, are full of human bones. So she obtains the services of a local expert on them, a hipster graffiti artist who goes by the not-exactly-original moniker Papillon (Francois Civil).

Despite his considerable reluctance, Scarlett also corrals her prickly pal George (Ben Feldman) into turning mole with her. Along with their interest in archaeology and the occult, these two share a romantic history together as well. But this is no time for hearts and flowers; it’s off to the world’s largest underground cemetery.

There Papillon does his best, but the expedition goes badly wrong (you knew it would, right?). Scarlett, George, Papillon and the other participants — Pap’s too-cool-for-school friends Souxie (Marion Lambert) and Zed (Ali Marhyar) as well as filmmaker Benji (Edwin Hodge) who’s documenting Scarlett’s doings — all begin to have hellish hallucinations.

Between Benji’s camera and Scarlett’s cell phone, Dowdle tries to create a sense of immediacy with a found-footage approach. But that conceit has gotten threadbare to say the least, while the initial promise of Dowdle’s tale — getting trapped in a vast ossuary below the City of Lights does have its gothic appeal — gets lost as quickly as his characters do.

The movie dabbles momentarily in the kind of reality-follows-thought notions clung to by Scientologists and the like. But this is just one more detour on a long, confused chase for daylight.

PREVIOUS: ‘How the World Was:’ A boy’s life in the Great Depression

NEXT: Sociologist’s look at RCIA can help Catholics appreciate their faith