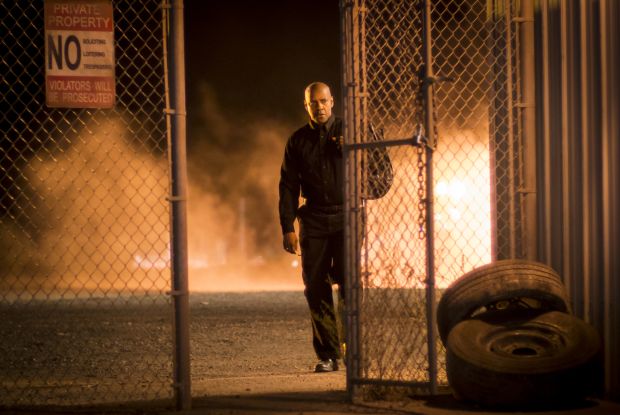 Denzel Washington stars in a scene from the movie "The Equalizer." (CNS photo/Sony Pictures)

NEW YORK (CNS) — Vigilante figures can be compelling in part because it’s natural to root against evildoers. And it’s much easier to be drawn in when a likable actor portrays the putative hero.

But no matter how intriguing and righteous an avenging character appears to be — and no matter how heinous the behavior he combats — cheering for violence is fundamentally perverse.

Based on the late-1980s television series starring Edward Woodward, “The Equalizer” (Columbia) cannot make a morally convincing case for committing brutal acts under the guise of justice. This action thriller is less exploitative than many others of its kind, yet there’s no shortage of objectionable elements — most prominently, an array of gruesome killings.

Denzel Washington plays Robert McCall, a quiet, affable man who lives alone in a spare Boston apartment. He’s a neat freak — meticulous to the extent he must surely suffer from obsessive-compulsive disorder — an exponent of consuming an all-natural diet, and an insomniac. He reads a lot, wears crisp button-down shirts and practical sneakers, and rides the bus to his job at a home improvement chain store.

Quick to dispense advice, both practical and philosophical, McCall is a natural teacher. (His favorite mantra is “Body. Mind. Spirit.”) He’s also inclined to extend a helping hand, as when he supports his colleague Ralphie (Johnny Skourtis) in his quest to lose weight so he can become a security guard.

Unable to sleep, McCall goes to a local diner every night where he reads classic novels and drinks tea, and where he befriends Teri (Chloe Grace Moretz), a young prostitute working for Russian mobsters.

When she’s severely beaten by her handlers, McCall takes up her cause and demonstrates his aptitude for violence by killing five thugs. Teddy (Marton Csokas), a soulless fixer, is sent from Russia to investigate and McCall responds by going after their entire criminal network, which relies on corrupt police officers.

There’s little mystery surrounding McCall’s former life. He’s a retired intelligence operative, trained to kill and extremely proficient at it. Before she died, he promised his wife he’d stop, but Teri’s plight awakens the vengeful assassin in him.Washington reunites with director Antoine Fuqua, who steered his Oscar-winning performance as a venal LAPD officer in “Training Day”. Fuqua puts a fairly artful sheen on the action but it’s just window dressing. Themovie‘s first act has a quiet, melancholy air. When the sleeping warrior wakes, however, it becomes a calculated frenzy of death. McCall dispatches bad guys with grotesque efficiency, using whatever tools are at hand.

No prizes are in the offing for Washington this time around, although he has the calm, middle-aged man of action down pat; he’s easy to watch, even when doing loathsome things. It’s a relatively nuanced, detailed portrait, but there’s nothing to exculpate McCall. He expresses some remorse after his initial outburst, whispering, “I’m sorry” — presumably to his late wife. He also claims he offers his victims the chance to do the right thing.

Yet his primary excuse for his vigilantism is, in effect, that he must do what he was trained to do. Call it the robot defense. A utilitarian, the-ends-justify-the-means explanation is heard when his ex-spymaster, Susan Plummer (Melissa Leo), assures McCall he must “make the wrong choices to get to the right place.”

When his final victim asks him what he will gain from killing him, McCall replies, “Peace.” Not only is his definition of peace idiosyncratic, it’s impossible to endorse.

PREVIOUS: ‘The Boxtrolls’: A cheesy but satisfying family film