‘The Boxtrolls’: A cheesy but satisfying family film 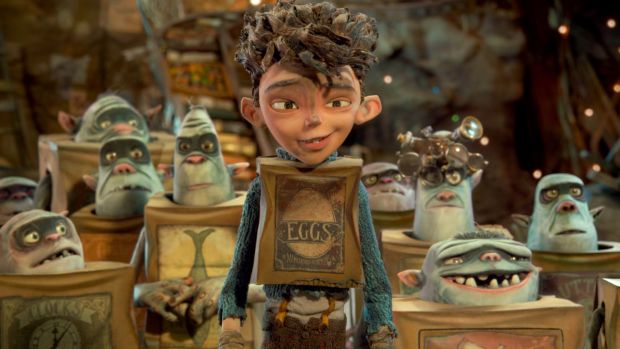 Eggs, voiced by Isaac Hempstead Wright, appears with other animated characters in the movie "The Boxtrolls." (CNS photo/Focus)

NEW YORK (CNS) — If Charles Dickens collaborated with Dr. Seuss, he might have produced “The Boxtrolls” (Focus), a charmingly bizarre urban fable about rich and poor and things that go bump in the night.

This 3-D adventure, featuring impressive stop-motion animation, is based on the 2005 children’s book “Here Be Monsters!” by Alan Snow.

The setting is Victorian England and the quaint village of Cheesebridge, marketed as “A Gouda Place to Live.” Yes, the residents are obsessed with dairy products, and the mayor, Lord Portley-Rind (voice of Jared Harris), rules the roost from a mansion on Curds Way (get it?).

His plucky daughter, Winnie (voice of Elle Fanning), longs for attention, but her father only has eyes for brie and camembert. Her world is turned upside down when she discovers “monsters” roaming the streets at night.

These are the Boxtrolls, aptly named as they are short of stature and wear recycled cardboard boxes (which double as hiding places). Scavengers by nature, they scour the garbage heaps for junk which they transform into magical inventions in their underground world.

Fearing for his cheese, Lord Portley-Rind accepts an offer from the wicked Archibald Snatcher (voice of Ben Kingsley) to root out and eliminate the Boxtrolls. In exchange, Snatcher will be elevated to the ruling class, and obtain a seat at the hallowed cheese-tasting table.

To underscore Snatcher’s evil nature, he sidelines as the drag queen Madame Frou Frou in a desperate attempt to mingle with high society.

Moreover, Snatcher’s assistants, Mr. Trout (voice of Nick Frost) and Mr. Pickles (voice of Richard Ayoade), offer a running commentary, questioning their boss’s motives and reminding the audience of the difference between good and evil.

The Boxtrolls have a bad rap, because once they allegedly stole a baby along with the garbage. Lovingly raised underground, the boy, named Eggs (voice of Isaac Hempstead Wright) after his box outfit, is now 11 and curious about the “upper” world.

Eggs bumps into Winnie, and she discovers that Boxtrolls are benevolent creatures who value family and loyalty. She joins forces with Eggs to expose Snatcher and the truth to her father and society. To succeed, they must work together and, yes, think outside the box (which means, in part, brief Boxtroll rear “nudity”).

Directors Graham Annable and Anthony Stacchi set a manic pace suitable to the absurdity of the material, which is served well by stunning animation and a first-rate voice cast. But parents beware: the overall tone is darker and scarier, which may be unsuitable for younger viewers.

The film contains scary moments, brief rear “nudity”, and some bathroom humor. The Catholic News Service classification is A-II — adults and adolescents. The Motion Picture Association of America rating is PG — parental guidance suggested. Some material may not be suitable for children.

PREVIOUS: ‘The Song’ sings a story lovers need to hear

NEXT: Hard to root for the good guy when he’s very bad