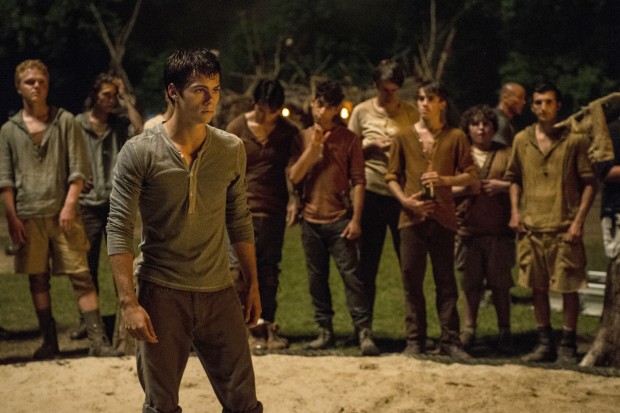 Dylan O'Brien stars in a scene from the movie "The Maze Runner." (CNS photo/Fox)

NEW YORK (CNS) — Cross “The Hunger Games” with “Divergent” and you’ll get “The Maze Runner” (Fox), the latest angst-ridden drama about teenagers fighting to survive in a post-apocalyptic world.

This go-round, there’s a boys-only twist, based on the 2009 novel by James Dashner (and borrowing heavily from William Golding’s 1954 classic, “Lord of the Flies”). The inhabitants of “The Glade,” a walled-in expanse of grass and trees, are all teenage boys, wiped of their memories. They must work together and build a community from scratch, all the while looking for a means to escape.

Think bonfires, cliques and macho displays of wrestling, and you won’t be far off.

How the boys got there is unknown. Every 30 days, a new recruit arrives via a mysterious underground elevator.

Enter Thomas (Dylan O’Brien). There’s something different about him, and his curiosity and daring threaten to upset the fragile world order built by the boys’ leader, Gally (Will Poulter).

The only way out is through the Maze, an ever-changing labyrinth that surrounds The Glade. Once a day, the entrance opens, and chosen boys called Runners enter, combing every nook and cranny for an exit.

Runners who don’t return in time before the doors close face certain death from the Grievers, spiderlike monsters that roam the Maze at night.

If this all sounds confusing, even a tad pointless, it is. And when the elevator deposits the first-ever girl, Teresa (Kaya Scodelario) — to the amazement of all those boys — things really get complicated.

Teresa and Thomas seem to know each other. They forge an alliance and convince the community to wage a new assault on the Maze and gain their freedom.

Naturally, someone is watching: the so-called Creators, led by Ava Paige (Patricia Clarkson). The Glade and Maze are the grown-ups’ doing, for reasons that are unclear.

But who needs adults anyway? Teenagers rule in this genre, and the (regrettable) impression endures that anyone over 18 is not to be trusted — or needed, for that matter.

Wes Ball directs “The Maze Runner” at a relentless pace, and some of the action sequences may be too intense for young viewers. It all builds up to a quizzical climax that screams the word Hollywood longs to hear: sequel.

The film contains occasional intense violence, including gory images, and some crude language. The Catholic News Service classification is A-III — adults. The Motion Picture Association of America rating is PG-13 — parents strongly cautioned. Some material may be inappropriate for children under 13.

PREVIOUS: Inspired by Old Testament, ‘The Song’ a modern story of love, faith

NEXT: This Is Where I Leave You