‘The Song’ sings a story lovers need to hear 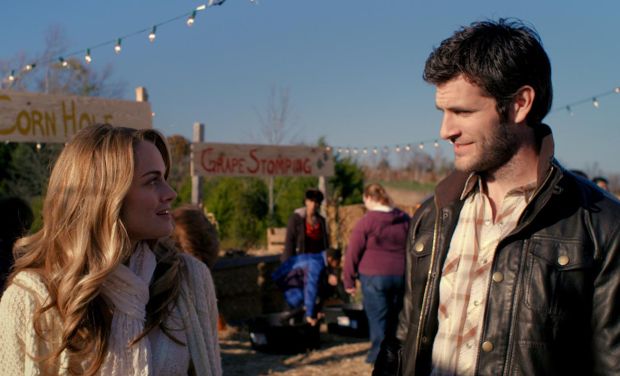 Ali Faulkner and Alan Powell star in a scene from the movie "The Song." (CNS photo/City on a Hill/Samuel Goldwyn)

NEW YORK (CNS) — Taking its inspiration from the Old Testament’s Song of Songs, “The Song” (City on a Hill/Samuel Goldwyn) offers a modern-day parable on love, marriage and remaining open and faithful to God’s plan.

Writer/director Richard Ramsey cleverly weaves passages from the scriptural canticle (attributed to Solomon) to illustrate love’s eddies and currents, from courtship to marriage, children, and building a life together. The result is a fresh, honest, and very Christian take on timeless issues.

We learn in flashback that David was a legend on stage, but a train wreck off. He had an affair with a married band member; a child was conceived, but aborted, with David’s approval. When his lover’s husband committed suicide, David married her, and eventually reformed his life, trying to set a better example for their son, Jed.

It’s not surprising that the sins of the father will one day be visited upon the son. But first, things look up for Jed. Performing at a harvest festival, he meets Rose (Ali Faulkner), and it is love at first sight.

“You have stolen my heart with one glance of your eyes,” he croons.

After a sweet courtship, they marry, and have a son. Jeb, still madly in love, writes a song for Rose — called, simply, “The Song” — and to his surprise it becomes a breakout hit. Seemingly overnight, Jeb is a big star, and hits the road for a worldwide concert tour.

The years pass, and the pressures of fame and frequent separations put a strain on the marriage. Rose remains faithful, keeping the home fires burning. Jeb is inspired, seeing himself as an evangelizer and healer.

“People come to hear my songs. They are looking for meaning, hope, God,” he tells Rose.

Unfortunately, not everyone is as high-minded. Temptation arrives in raven-haired Shelby (Caitlin Nicol-Thomas), Jeb’s new opening act. Shelby spells trouble, mocking Jeb’s “religious” nature — she prefers to call herself “spiritual” — and encouraging him to get a tattoo (never a good sign).

Needless to say, it’s all downhill from here. Confused and lonely, Jed succumbs, eerily reminiscent of his father’s downward spiral.

Granted, the resolution of “The Song” is predictable, but it is no less refreshing for that. Hollywood can take a lesson from an entertaining film which is openly — and happily — Christian in its outlook, and eager to remind viewers about forgiveness and redemption, as well as the sacredness of married love.

The film contains adulterous situations, suicide, and drug use. The Catholic News Service classification is A-III — adults. The Motion Picture Association of America rating is PG-13 — parents strongly cautioned. Some material may be inappropriate for children under 13.

NEXT: ‘The Boxtrolls’: A cheesy but satisfying family film