As a game or movie, ‘Ouija’ isn’t fun or fitting 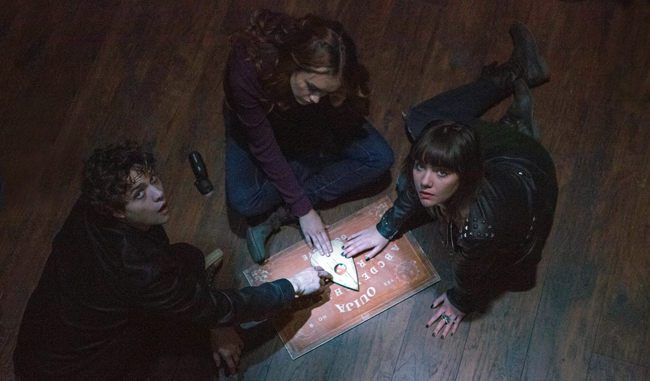 From left, Douglas Smith, Olivia Cooke and Ana Coto star in a scene from the movie "Ouija." The Catholic News Service classification is A-III -- adults. The Motion Picture Association of America rating is PG-13 -- parents strongly cautioned. Some material may be inappropriate for children under 13. (CNS photo/Universal)

NEW YORK (CNS) — Like some who play the “game” from which it takes its title, the folks behind “Ouija” (Universal) want to have it both ways: It’s all about harmless fun, of course. But what if it’s not?

A half-baked cautionary tale that nonetheless serves as extended product placement for the Hasbro version of the device, director and co-writer Stiles White’s muddled chiller is an amateurish effort that delivers few jolts and little entertainment. Its ambiguous portrayal of a spiritually dangerous pastime, moreover, makes the film totally unsuitable for impressionable viewers.

When seemingly happy teen Debbie (Shelley Hennig) mysteriously hangs herself, her best pal Laine (Olivia Cooke) and her boyfriend Pete (Douglas Smith) are left with a host of troubling questions. So they ill-advisedly try to communicate with Debbie using a Ouija board the deceased girl had recently unearthed in her attic.

As the audience already knows, and as some who haven’t even seen the movie can easily guess, a malevolent spirit summoned up by this item was the cause of Debbie’s untimely demise. Thus, by consulting it, Laine, Pete and those rounding out the seance — Laine’s younger sister, Sarah (Ana Coto), her school chum Isabelle (Bianca Santos) and her sweetheart, Trevor (Daren Kagasoff) — have all landed themselves in the supernatural soup.

Extricating themselves involves finding out about the unwholesome family who once lived in Debbie’s house, making more than one visit to an asylum for the insane and crawling around in a dark basement. While White and his script collaborator Juliet Snowden are thus busily lurching from one genre standby to the next, characters are rapidly being felled — one of them, at least, in a manner that’s quite nasty to watch.

The ultimate impact on moviegoers? Well, there is another way to spell “board.”

The film contains occult themes, brief but harsh violence, a suicide, a couple of crude terms and some mild oaths. The Catholic News Service classification is A-III — adults. The Motion Picture Association of America rating is PG-13 — parents strongly cautioned. Some material may be inappropriate for children under 13.

PREVIOUS: Steal this book? No, ‘Shoplifter’ is worth paying for