Steal this book? No, ‘Shoplifter’ is worth paying for 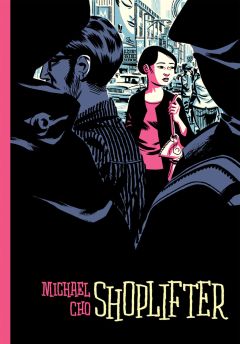 This is a page from the comic book “Shoplifter.”

NEW YORK (CNS) — Sometimes we commit a sin because we feel helpless and unable to control our situation.

If we’re lucky, we encounter an understanding soul who shows us mercy and convinces us to take a different path.

That’s the story arc of “Shoplifter” (Pantheon), a wise and prettily drawn graphic novel from cartoonist and writer Michael Cho.

Although “Shoplifter” boasts two-color retro art that looks like it came from the 1950s and an uplifting overall message, it also includes elements that make it inappropriate for children.

The novel recounts a few weeks in the life of Corrina Park, a 20-something writer who has an attack of conscience while working at an advertising firm. (Corrina’s home city is never identified — an intentional omission on Cho’s part.)

The book opens with Corrina at a strategy meeting. “Fly,” the product she is being asked to sell, is a body scent for 9-year-old girls. Corrina balks, and sarcastically confronts her co-workers with the truth: They’re peddling perfume to young girls.

On her way home, Corrina anguishes over the direction her life seems to be taking. She studied literature in college, and was supposed to become a writer. She can’t find any nice men to date; she’s lost contact with a lot of her friends back home; even the cat she rescued doesn’t seem to like her.

Corrina then stops at a convenience store. She shoplifts, tucking a magazine inside a newspaper and only paying for the latter. “I know it’s wrong,” she says, “but it makes me feel a little better. A little more alive.”

This is a very understated and effective plot device. Instead of societal pressure causing a character to go berserk and transform into a Hulk or a Joker, we have a morally strong person who commits a petty misdeed to cope with the feeling of being besieged by a toxic culture.

Cho draws a correlation, both literally and figuratively, between Corrina and the polar bear she watches on a TV news report about the melting ice caps. Both, he suggests, are innocents adrift in an environment of decay.

The drinking, promiscuity and ruthlessly immoral marketing techniques that prevail among her peers — along with simple loneliness — finally bring Corrina to a breaking point. She robs again, this time getting caught by the store manager.

It would be wrong to spoil the ending of “Shoplifter.” But it’s safe to say that readers who know the beauty and redemptive grace of mercy will like what Cho has done here. “Shoplifter” is a compelling story about the power of forgiveness.

The graphic novel contains a single use of profanity, a couple of crude terms and some sexually suggestive material. The Catholic News Service classification is A-III — adults. Not otherwise rated.

NEXT: As a game or movie, ‘Ouija’ isn’t fun or fitting