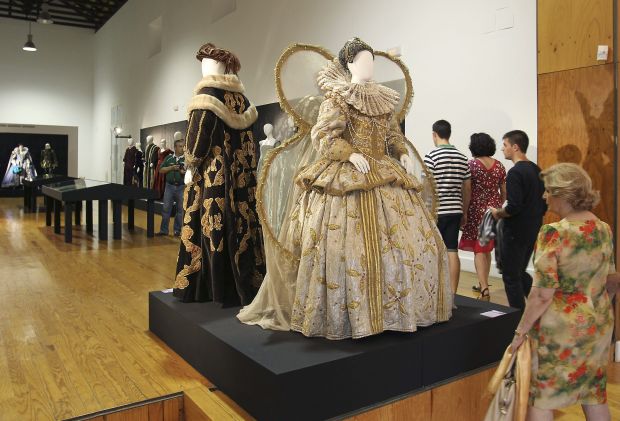 Visitors look at historic costumes worn by actors of several theater companies to represent some of the plays by British playwright William Shakespeare during July's Almagro's Classical Theatre Festival in Almagro, Spain. New historical research suggests that Shakespeare was a secret Catholic at a time when the faith faced persecution in England. (CNS photo/Mariano Cieza Moreno, EPA)

“Necessity will make us all forsworn. Three thousand times within this three years’ space; for every man with his affects is born, not by might master’d, but by special grace,” recited the actor playing Berowne in “Love’s Labor’s Lost.”

When the latest production of William Shakespeare’s beloved play opened recently, set in an English mansion before World War I, it attempted to draw new meaning from the Bard’s eternal lines.

A similar task is being pursued by historians and researchers amid claims that Shakespeare was a secret Catholic at a time when the faith faced savage persecution.

“The probability that Shakespeare was a hidden Catholic helps explain the generally recognized enigma behind his work,” said Jesuit Father Peter Milward, an authority on the playwright.

“The Catholic elements visible everywhere in his 37 plays suggest he can be viewed as a champion of medieval Christendom, looking back with nostalgia to England’s past Catholic traditions,” Father Milward told Catholic News Service.

Views of Shakespeare until recently have been dominated by an “old guard” of literary scholars, who have portrayed him as conforming with England’s Protestant establishment, Father Milward said.

Although his vast output explored human emotions and dilemmas, it was held to be essentially artistic, as befitted England’s golden age under Queen Elizabeth I. However, new historical evidence has produced a “turning of the tide,” the Jesuit said.

Shakespeare was most prolific from 1589 to 1613 as the Reformation still was being imposed, causing creative people to avoid drawing attention to their religious beliefs. Some experts now think Shakespeare was deeply religious and that far from going along with England’s official Protestant ideology, the playwright was deeply attached to the Catholic devotions suppressed a generation before.

“Shakespeare rose above the disputes of his day and never descended to sectarian squabbles. But by hiding theological messages in his secular language, he invited his listeners to ponder the heritage they’d lost,” said Claire Asquith, author of “Shadowplay: the Hidden Beliefs and Coded Politics of William Shakespeare.”

“Catholic idioms and images are present throughout his work, in a forgotten world of saints and holy places. It seems we’ve been deaf to this and missed much of Shakespeare’s subtlety as a result,” Asquith told CNS.

Generations of English-speaking children, Asquith argued, were taught an orthodox view of the 16th century, in which a corrupt Catholic church was rightly taken over and reformed by King Henry VIII, allowing an enlightened Protestant-led compromise to be established by Queen Elizabeth. 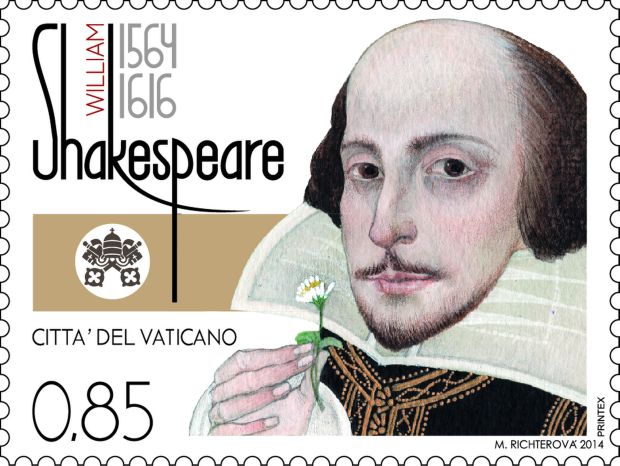 The Vatican Post Office will celebrate the 450th anniversary of the birth of William Shakespeare with a stamp featuring art work by Czech artist Marina Richterova. The stamp will go on sale at the Vatican Nov. 21.

The interpretation has been challenged in recent years by Catholic historians, who have cited evidence that the destruction of the “old religion,” far from reflecting popular demands, was motivated by top-down political expediency.

Such scholars have depicted Queen Elizabeth as a harsher figure. Some 35,000 people died in prison or on the scaffold during her 45-year reign, and Catholics, loyal to the old faith, were prime targets for repression.

The official hostility was understandable. The queen was declared excommunicated and deposed by Pope Pius V in 1571, and an invasion force, the Spanish Armada, launched with Rome’s blessing 17 years later.

But for ordinary Catholics conditions became intolerable as all non-conforming religious life was driven underground. For a writer such as Shakespeare it would have been dangerous to overtly display Catholic sympathies. Working them into his plays necessitated subtlety and skill.

Clues to Shakespeare’s apparent Catholic loyalty nevertheless have been pieced together.

It is known that his father, John Shakespeare, a Stratford town councilor, ran into trouble because of his Catholic preferences. The surrounding county, Warwickshire, was linked to the Gunpowder Plot of 1605, when Catholic conspirators attempted to blow up King James I and his parliament in London.

The playwright’s eldest daughter, Susanna Hall, is believed to have boycotted Protestant services, while his mother’s family, the Ardens, were related to St. Robert Southwell, a Jesuit priest who was executed in 1595. Historians believe his poetry influenced the writing of “Macbeth” and “Titus Andronicus.”

London’s South Bank, where Shakespeare’s Globe Theatre was situated, was a focus for underground Catholic life. In 1613, three years before his death, the playwright bought a large house in Blackfriars which was used for covert Catholic gatherings.

Father Milward said coded religious references are widespread in Shakespeare’s work. Citing the fact that Shakespeare’s comedies are set in Catholic Italy, while his ideal heroines show a fullness of grace reminiscent of Catholic notions of the Virgin Mary; the lovers’ go-between in several plays, including “Romeo and Juliet,” is a Franciscan friar who is revered as holy.

Asquith agreed, saying characters such as Malvolio, the mordant puritan in “Twelfth Night,” and the king’s long-lost daughter, Perdita, in “The Winter’s Tale,” personify the religious mentalities of Shakespeare’s time. The plays also are saturated with allusions to Catholic suffering, and can be seen as collective plea for tolerance and reconciliation, she said.

When Asquith’s book was published in 2005, it was dismissed by David Womersley, professor of English literature at Oxford University, as “a tide of wild hypothesis, strained reading and reductive historicism.”

Diarmaid Macculoch, a lecturer on church history at Oxford, has doubts too. When Shakespeare quoted the Bible, he used official Protestant translations, he said.

“Of course, there was some nostalgia for the old religion, and it’s natural Catholics should claim this great cultural icon for themselves,” Macculoch told CNS.

“But Shakespeare’s Catholic family associations prove nothing about his own outlook. It’s wrong to assume his work reflects some popular groundswell in favor of Catholicism.”

While the debate continues, the contrasting views serve as a reminder of Shakespeare’s richness as a writer with a profound grasp of life’s tragic and comic complexities.

“Until precise documentary proof emerges, it’s unlikely there’ll be any consensus among scholars,” said Father Milward, whose books include “The Catholicism of Shakespeare’s Plays” and “Shakespeare the Papist.”

“But Shakespeare has influenced generations of English speakers. If he really was a hidden Catholic, we’ll clearly need to revise our understanding of this crucial period.”

PREVIOUS: Fleeting fame is topic of ‘Birdman or (The Unexpected Virtue of Ignorance)’