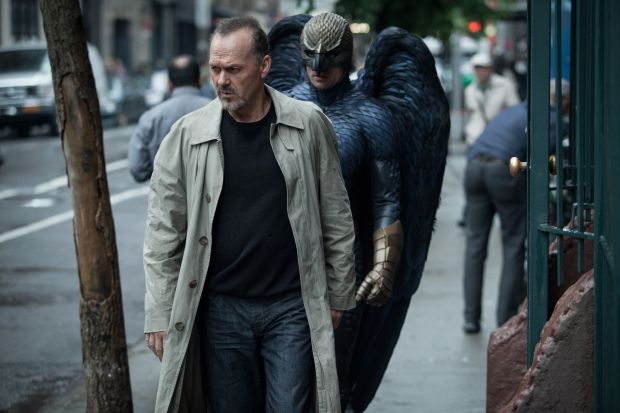 NEW YORK (CNS) — Talky, pretentious and filled with existential angst when the characters aren’t preoccupied with spitting curses, “Birdman or (The Unexpected Virtue of Ignorance)” (Fox Searchlight) is visually dazzling.

This black comedy reflects on the nature of fame — specifically, the warping power of movie fame gained by playing big-budget comic-book heroes. It occasionally circles this theme, but provides no resolution. Gloom, anxiety and complete self-absorption supplant responsible behavior — with no evident consequences.

Michael Keaton plays Riggan Thomson, an actor who has achieved worldwide fame playing an action hero called Birdman in a series of films. This, of course, parallels Keaton’s own experience as the star of two Batman pictures released in the late 1980s and early ’90s. We are constantly reminded that Thomson’s turn as Birdman represented a soul-deadening artistic sellout.

With much of his money now drained away, Thomson is attempting to redefine himself as a serious actor. He has adapted — and is directing and starring in — a work by famed short-story writer Raymond Carver, “What We Talk About When We Talk About Love.” As the movie opens, the show is in previews on Broadway.

The preview performances mostly go wrong, launching a series of in-jokes for theater buffs. Things go from bad to worse when, after a rehearsal mishap, Thomson hires intense performer Mike (Edward Norton), who undermines him at every opportunity.

Riggan’s Birdman alter ego haunts him in voiceovers, taunting him about his earlier celebrity and deriding his effort to become a grounded actor. That Riggan’s movie powers derived entirely from special effects never appears in these discussions.

Riggan understands so little about Carver’s story that he ends the play with an on-stage gun suicide he wrote himself. This delights the uncaring, whooping audiences in need of spectacle, while guaranteeing he’ll get a hostile review from The New York Times.

Director Alejandro G. Inarritu and his co-writers, Nicolas Giacobone, Alexander Dinelaris Jr. and Armando Bo, fill most of the film with bitter speeches. Riggan’s daughter and assistant Sam (Emma Stone) gets to deliver one of the strongest of them: “You’re doing this because, like the rest of us, you’re scared you don’t matter! And guess what — you don’t matter! Get used to it!”

Riggan has his supportive current girlfriend Laura (Andrea Riseborough) in the cast and sometimes receives terse counseling from producer Jake (Zach Galifianakis). But most of his best advice comes from his ex-wife, Sylvia (Amy Ryan), who consoles him with, “It’s what you always do. You mistake love for admiration.”

One’s reaction to the movie becomes, then, strictly a matter of taste. If you savor vinegar — as in, bucket after bucket of it — you’ll have little trouble enduring this. Otherwise, it’s a sad, bilious journey.