Whole family gets to share in Alexander’s very bad day 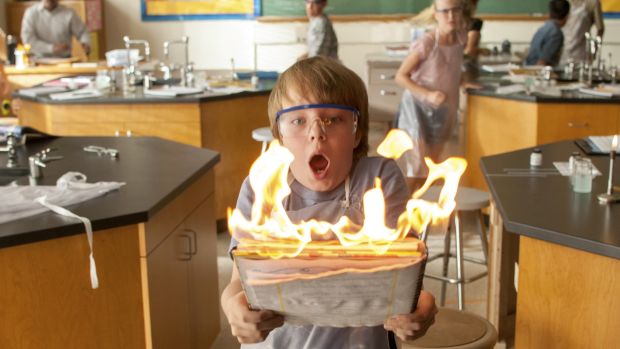 Ed Oxenbould stars in a scene from the movie "Alexander and the Terrible, Horrible, No Good, Very Bad Day." (CNS photo/Disney)

NEW YORK (CNS) — Top prize for the most descriptive (and longest) film title of the year goes to “Alexander and the Terrible, Horrible, No Good, Very Bad Day” (Disney).

This manic comedy, based on the 1972 children’s book by Judith Viorst, follows the exploits of the titular 12-year-old boy (Ed Oxenbould) as he experiences the seemingly worst day of his life. Murphy’s Law reigns supreme in Alexander’s universe: just about everything that can go wrong does.

But in a departure from the book, director Miguel Arteta (“Youth in Revolt”) and screenwriter Rob Lieber extend the mayhem to Alexander’s family members so they, too, can feel what it’s like for Alexander at the very bottom of the totem pole.

It’s the day before Alexander’s birthday, and his downward spiral starts with a minor annoyance: he gets gum stuck in his hair. It’s a portent of the calamities to come. He’s ridiculed by students at school, fails to impress the pretty girl in class, and nearly burns down the science lab.

Worst of all, Alexander gets no sympathy, or even much attention, at home. His mom, Kelly (Jennifer Garner), is preoccupied with her job at a publishing company. His stay-at-home dad, Ben (Steve Carell), is busy with 1-year-old Trevor (Elise and Zoey Vargas).

The older siblings are equally self-absorbed. Anthony (Dylan Minnette), the most popular kid in school, is getting ready for the prom. Emily (Kerris Dorsey) has the lead in the school production of “Peter Pan.”

So as his birthday dawns, Alexander makes a wish: that his family could know what it’s like to have a really awful day.

Needless to say, they all do. Anthony crashes the car. Trevor has a close encounter with indelible ink. Emily, fighting a cold, drinks too much cough syrup.

Even Dick Van Dyke, playing himself, turns up to spoil Kelly’s book launch.

If you can look beyond the relentless physical gags, a peeing baby and a vomiting teenager, there’s a small lesson here in how a family pulls together in the midst of adversity.

In the words of Alexander, “You’ve gotta have a bad day so you can love the good days even more.”

The film contains mild family discord, some bathroom humor and references to body parts. The Catholic News Service classification is A-II — adults and adolescents. The Motion Picture Association of America rating is PG — parental guidance suggested. Some material may not be suitable for children.

PREVIOUS: For a warmhearted film with seamy underside, you be ‘The Judge’

NEXT: Movie review: The Book of Life