Movie review: The Book of Life 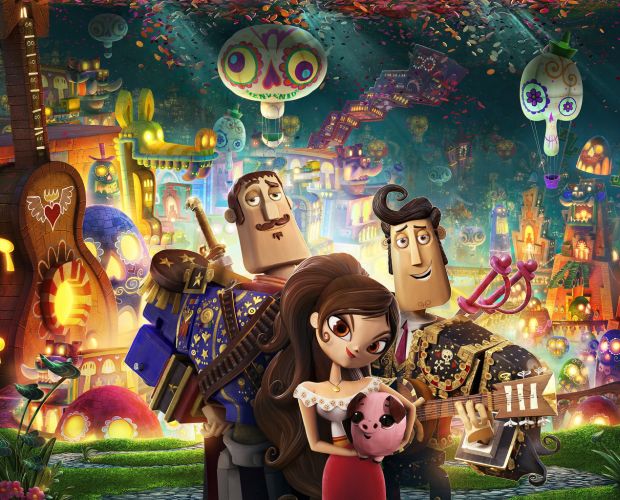 This is a scene from the animated movie "The Book of Life." (CNS photo/Fox)

NEW YORK (CNS) — Who knew the Day of the Dead could be so much fun? The Mexican method of observing All Souls’ Day, Nov. 2, is the backdrop for “The Book of Life” (Fox), an entertaining and visually stunning 3-D animated film.

Traditionally on this feast day, families visit cemeteries to place gifts by the gravesides of their departed loved ones in a spirit of remembrance. Although the practice is Aztec in origin, its intentions correspond with Catholic teaching, which encourages prayer for the souls of the deceased.

In popular culture, the Day of the Dead has often morphed into a Halloween-like party with multicolored skulls and imagery bordering on the diabolical. Fortunately, this is not the case in “The Book of Life.” Instead, director and co-writer (with Douglas Langdale) Jorge R. Gutierrez uses the observance to highlight the enduring bonds of family.

Yes, dancing skeletons abound, and there are mythological aspects to the plot that might call for discussion with impressionable youngsters. But this is, in essence, a harmless fairy tale.

At its core, “The Book of Life” is a love story, told to schoolchildren on a museum visit by one of the institution’s guides, Mary Beth (voice of Christina Applegate). She uses wooden dolls that spring to life to enact her yarn.

In the Mexican village of San Angel, best friends Manolo (voice of Diego Luna) and Joaquin (voice of Channing Tatum) have been in love with the same woman, Maria (voice of Zoe Saldana), since childhood.

Manolo is a reluctant bullfighter, forced into the ring to uphold his family’s proud tradition. A gentle, sensitive soul, Manolo would rather make beautiful music with his guitar — and with Maria. (He woos her with a surprising playlist that includes covers of Elvis Presley and Rod Stewart.)

Joaquin, on the other hand, is a puffed-up macho soldier, struggling to live up to his own family line of fierce warriors.

Unbeknownst to Manolo, Joaquin has a secret weapon: a medal which makes him invincible. This charm was given to him by the god Xibalba (voice of Ron Perlman), the ruler of the desolate Land of the Forgotten, a purgatory-like underworld populated by the spirits of those who have no one to pray for them.

Xibalba longs to escape his realm. So he makes a wager with his estranged wife, the goddess La Muerte (voice of Kate del Castillo), overseer of the heaven-like Land of the Remembered. The bet centers on Maria. If she chooses Joaquin as her mate, La Muerte will, reluctantly, swap positions with Xibalba.

Since Xibalba has stacked the deck in favor of Joaquin, things look bad for La Muerte and Manolo. But several twists and turns are in store as the action shifts back and forth among the three worlds.

Although “The Book of Life” is a fantasy and does not espouse a particular religion, it does include among hundreds of background characters a (presumably Catholic) priest and a trio of nuns. Their depiction is, however, perfectly respectful.

Parents should be advised that, while the tone is light and the action slapstick, there are several dark moments which may frighten younger viewers.

In the end, Catholic moviegoers will concur with the script’s lesson about honoring the dearly departed: “As long as we remember, they are always with us.”

The film contains nonscriptural religious themes, some mildly scary sequences, occasional bathroom humor and a few very mild oaths in Spanish. The Catholic News Service classification is A-II — adults and adolescents. The Motion Picture Association of America rating is PG — parental guidance suggested. Some material may not be suitable for children.

NEXT: Chapels on campus seen from religious, architectural perspectives