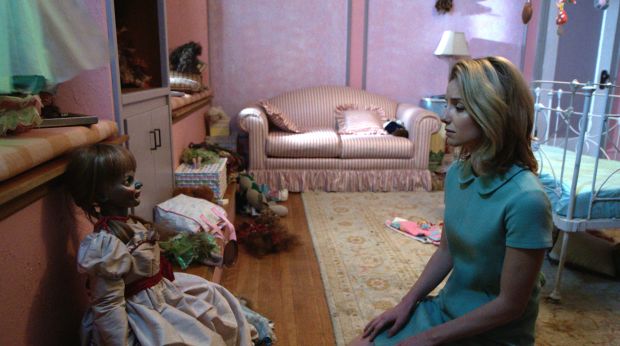 Take the googly-eyed star of “Annabelle” (Warner Bros.), who likes to interfere with anything electrical while plotting to steal a baby’s soul for Satan, known in this film simply as “the Ram.” Try tossing her in the garbage and she’ll sneak back in a mover’s box. And don’t smack her around. That angers the Ram.

“Annabelle” delivers a reliable series of horror-genre frights under the direction of John R. Leonetti from Gary Dauberman’s script. It’s a sort-of prequel to 2013’s “The Conjuring,” which featured the exploits of real-life, self-styled exorcists and “demonologists” Ed and Lorraine Warren.

Though there’s a “real” Annabelle in a glass case at the Warren’s house, so we’re informed, the cabinet-dwelling counterpart turns out to be a decidedly mundane-looking Raggedy Ann.

In this go-round, neither the Warrens nor the rite of exorcism are portrayed. Alas, this being a demon tale, Catholic faith is still the background. Leonetti and Dauberman aim to duck most cliches, though, so there’s no brandishing of crucifixes, nor are faith practices portrayed as ancient superstition.

However, kindly Father Perez (Tony Amendola) proves less vital to the machinations than Evelyn (Alfre Woodard), the owner of a bookstore specializing in the paranormal.

Father Perez, who gets punched around a bit by the forces of evil, mostly speaks in aphorisms about Christian faith with the occasional New Testament quotation, and limns the all-important theme of sacrificial mother-love.

He’s comforting but ineffectual. Instead, Evelyn, who lost her young daughter years before, is the moral center.

“Demons. What do they want?” asks Mia (Annabelle Wallis), whose infant daughter is being threatened by the Evil One.

“A soul,” Evelyn replies. “And they won’t stop until they get one.”

The story is set in Southern California in 1970, a year after the Manson Family killings. While Mia is still pregnant, she and her next-door neighbors are attacked by members of a cult known as the Disciples of the Ram. One cultist, Annabelle Higgins, is the neighbors’ daughter.

Mia’s surgeon husband, John (Ward Horton), and the police shoot down the attackers. But Mia, you see, collects large antique dolls. Wouldn’t you know it, Annabelle’s soul enters the largest of them, the baby is born, all doors begin to creak, and the skittering around begins.

NEXT: Books probe past and future of Christianity in China