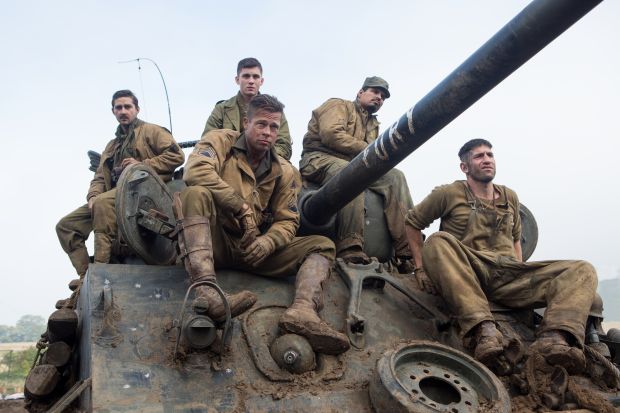 Yet, by bringing them together in “Fury” (Sony), writer-director David Ayer crafts a powerful — albeit disturbing — study of the psychological effects of combat.

In addition to a willingness to subject themselves to sometimes repellent images, those few grown-ups for whom the film makes suitable viewing also will require ethical subtlety to work their way through the script’s thicket of moral complexity.

Those not appropriately equipped to navigate this challenging terrain may find themselves as bewildered as Norman Ellison (Logan Lerman), the young GI in whose company we primarily traverse it.

With the European phase of World War II reaching its final stages, and American troops rolling ever deeper into Germany, Norman finds himself assigned to replace a fallen crew member on the tank whose nickname serves as the movie’s title.

This comes as unwelcome news to the vehicle’s hard-bitten commander, Don Collier (Brad Pitt) — all the more so after Norman protests that he has only been trained for a desk job, and that his current orders must be a mix-up.

Snafu or not, however, there’s no undoing the transfer. So Norman is forced to settle in to his new surroundings under the hostile gaze of a trio of unwilling comrades: Boyd Swan (Shia LaBeouf), Trini Garcia (Michael Pena) and Grady Travis (Jon Bernthal).

Boyd, a born-again Christian whose moniker is “Bible,” introduces the movie’s religious theme by asking hapless Norman if he is saved. When Norman, an Episcopalian, replies that he has been baptized, Boyd only scoffs.

Novice gunner Norman soon has a much bigger problem than this lack of ecumenical understanding. Totally unschooled for his military task, he has difficulty bringing himself to kill enemy soldiers.

Since Norman’s delicacy could end up costing lives, Collier resorts to a savage measure, attempting to force Norman to shoot a German prisoner in cold blood. Yet we soon see other aspects of Collier’s character that prove he has not given way entirely to such barbarism.

As Norman struggles to adapt to the kill-or-be-killed environment into which he’s been thrown, he gradually learns to follow Collier’s example — suspending some tenets of basic morality while keeping other facets of his humanity intact.

Mature moviegoers will need sound judgment to assess the terms of that bargain as well as a high tolerance for harsh visuals to endure the graphically portrayed circumstances which lead Norman to imitate Collier by adopting it.

A margin of compensation comes in the more serious treatment of faith to which Boyd’s biblical literacy eventually leads. But for some Christian viewers, at least, this blend of theologies will seem irredeemably out of place amid the much more prominent slaughter by which it’s surrounded.

NEXT: Steal this book? No, ‘Shoplifter’ is worth paying for