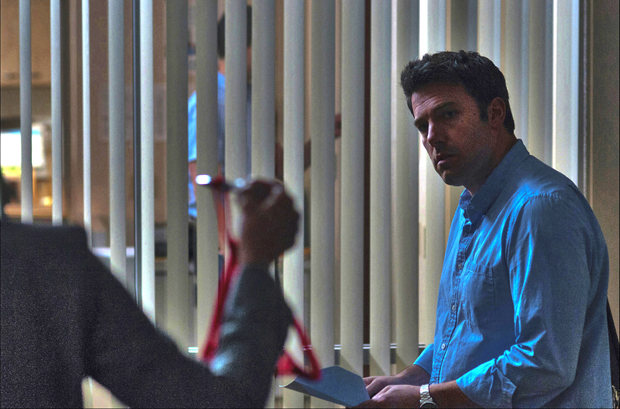 In fact, director David Fincher’s adaptation of Gillian Flynn’s best-selling novel presents the married state as a claustrophobic cage in which disillusioned spouses are left to tear away at each other like a pair of angry weasels.

The seemingly inevitable misery that results from exchanging vows, moreover, is at least implicitly contrasted, in Flynn’s screenplay, with the bliss afforded by the kind of fully sexual but as yet uncommitted relationship that today so often precedes a trip down the aisle.

Such, at least is the experience of Nick (Ben Affleck) and Amy (Rosamund Pike) Dunne. This apparently happy suburban couple’s dark post-nuptial secrets begin to be revealed after Amy disappears and all clues seem to suggest that Nick has murdered her.

Fortunately for Nick, Detective Boney (Kim Dickens), the lead investigator on the case, is reluctant to jump to conclusions. And Nick’s twin sister, Margo (Carrie Coon), is steadfast in her support for him, despite the mounting negative evidence.

“Gone Girl” features some fine acting — especially the agile mood-swings registered by Pike (who nonetheless occasionally strays into campy excess) — and a series of clever plot twists. It also gets in some telling jabs at the manipulative influence of the media, especially via the character of self-righteous, perpetually outraged TV host Ellen Abbot (Missi Pyle).

At the same time, however, the movie showcases seedy sexual behavior in an exploitative manner — as when we’re shown Nick and Amy’s fondness for coupling in semi-public settings. And the proceedings become blood-soaked during a climactic scene — not to be described for fear of a spoiler — that’s played for shock value.

The film contains considerable violence with brief but extreme gore; strong sexual content, including graphic adulterous and aberrant sexual activity as well as upper female and rear nudity; at least one use of profanity; pervasive rough and much crude language. The Catholic News Service classification is O — morally offensive. The Motion Picture Association of America rating is R — restricted. Under 17 requires accompanying parent or adult guardian.

PREVIOUS: Books probe past and future of Christianity in China

NEXT: Movie review: Left Behind