Violent ‘John Wick’ offers an antihero who’s hard to like 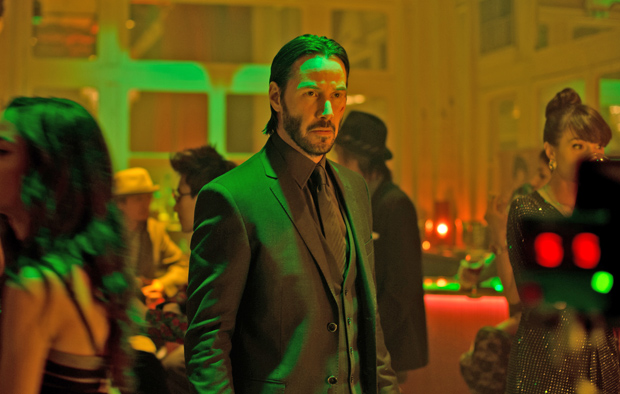 Keanu Reeves stars in a scene from the movie "John Wick." (CNS photo/Lionsgate)

NEW YORK (CNS) — Keanu Reeves is best known for playing a messianic figure in the “Matrix” trilogy, a police officer on a runaway bus in “Speed,” an FBI agent who surfs in “Point Break” and, early in his career, a knuckleheaded teen in “Bill and Ted’s Excellent Adventure.”

If there is one word to describe his screen persona, it’s laconic. Reeves tends not to play hyper-articulate characters, and imaginative line readings are not a hallmark of his performances.

He’s more apt to portray strong, silent types — men of action who, if judged by their outward appearance and the way they sound, are easily written off as slackers. Yet they get the job done and project enough vulnerability to invite audience sympathy.

Starring as the eponymous antihero of the action thriller “John Wick” (Summit), Reeves stays true to form, up to a point. Wick is a man of few words and efficacious. But since his chief talent is for killing, he’s incapable of evoking sufficient compassion. The result is that Reeves seems as capable as ever, but much more inert emotionally.

Pseudo-stylish and extremely violent, the movie itself plays like a long commercial for a fancy imported beer. A significant amount of casual, tongue-in-cheek humor is generated by the characters’ reactions to Wick’s lethal prowess — enough to lighten the proceedings a bit, though not nearly enough to wash away the blood or offset the high body count.

A notoriously brutal and persistent hit man, John Wick has had the rare experience of being allowed to withdraw from the New York crime scene and lead a so-called “normal” life in suburban New Jersey. But following the death of his wife from unnamed natural causes, he’s drawn back in when a young thug steals his prized 1969 Ford Mustang and kills the puppy his spouse left him to help with the grieving process.

The rash hoodlum turns out to be Iosef Tarasov (Alfie Allen), son of Russian crime czar Viggo Tarasov (Michael Nyqvist), a former associate of Wick’s. Although he doesn’t put it in so many words, there’s little doubt Wick will exact revenge. Aghast at having woken such a potent foe, Viggo goes on the offensive and provides an endless supply of black-suited henchman to be dispatched.

In a series of repetitive sequences, Wick eliminates everyone in his way, frequently by shooting them in the head at point-blank range or snapping their necks. His friend and fellow hit man, Marcus (Willem Dafoe), gets drawn into the mayhem, as does a female assassin called Ms. Perkins (Adrianne Palicki).

Making his directorial debut, longtime stunt coordinator Chad Stahelski doesn’t choreograph the action with any appreciable verve. The noir atmosphere he aims for is neither original nor convincingly rendered. Dressing everyone in three-piece suits and making use of dim lighting doesn’t cut it. The effort to present a criminal underworld governed by a strict code of behavior — and in which all the nefarious players lodge at the same chic Manhattan hotel — is faintly ludicrous and decidedly unglamorous.

Wick knows how evil he is and, while not completely without remorse, never pretends to be civilized or morally redeemable. That doesn’t make him less culpable or his murderous behavior any easier to watch, however. It only renders the movie drearily inevitable.

Likewise, asking — as numerous characters do — whether Wick has come out of retirement permanently and whether it’s even possible to ever extricate oneself from this milieu, is idle speculation. The only certainty is that Reeves’ latest screen venture is eminently avoidable.

The film contains pervasive bloody violence involving guns, knives, martial-arts combat and the brutal treatment of a priest, possible euthanasia, animal cruelty, drug use, an irreverent depiction of a Catholic church, at least one instance of profanity as well as frequent rough and some crude language. The Catholic News Service classification is O — morally offensive. The Motion Picture Association of America rating is R — restricted. Under 17 requires accompanying parent or adult guardian.

NEXT: Fleeting fame is topic of ‘Birdman or (The Unexpected Virtue of Ignorance)’