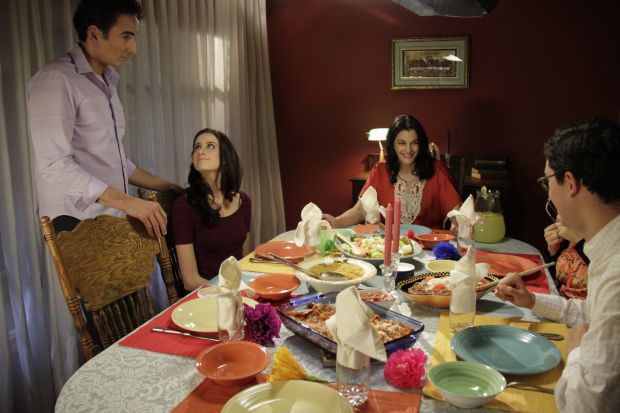 This is a scene from Family Theater's latest production, "Family Dinner." The TV drama focuses on a teen girl getting caught by her parents trying to sneak out to meet a boyfriend her folks haven't even met yet. (CNS photo/courtesy of Family Theater Productions)

WASHINGTON (CNS) — Family Theater Productions — the entertainment-with-a-message arm of Holy Cross Family Ministries, was first known in the pre-TV era for its weekly “Family Theater” radio anthology, in which stars of the day acted out radio scripts.

There was a willing audience of listeners, and a willing appetite for such fare expressed by radio stations of the era, particularly the old Mutual Broadcasting System.

When television happened upon the scene, Family Theater did what it could to prevent the TV set from being thought of as the “idiot box” by producing a host of TV dramas.

Narrators included MacDonald Carey (“Days of Our Lives”), Sebastian Cabot (“Family Affair”), and even Father Patrick Peyton, who founded Family Theater and the “Family Rosary” campaign, along with the slogan “The family that prays together stays together.” One of the directors was Joseph Breen, who enforced Hollywood’s “production code” for the better part of 20 years until retiring from that post in 1954.

It’s a new era now. Even in the 500-channel universe, there’s no guarantee that you’ll get to see your production shown to any audience, regardless of size. Family Theater is no different.

Tony Sands, a senior producer for Family Theater Productions, wears many hats in his job. For instance, he wrote and directed Family Theater’s latest production, “Family Dinner.” And he also shopped around the finished product. He found a taker in CatholicTV, the satellite TV ministry of the Archdiocese of Boston, which aired the half-hour program three times on Thanksgiving Day.

“Family Dinner” focuses on a teen girl getting caught by her parents trying to sneak out to meet a boyfriend her folks haven’t even met yet. This results in the parents issuing an invitation to the wary boyfriend to dinner with the family, and the girl doing chores in the household to get everyone ready for the dinner.

The drama, Sands hopes, teaches audiences about the nature of true love and how Jesus’ love and selfless service calls all to share in the Eucharist.

“We never stopped doing video. It’s just a question of how often,” Sands said. “We’ve had a bigger push in recent years, gearing up more in the past three years to have a bigger presence on the Internet.” Family Theater has its own YouTube channel to allow anyone with Internet access a chance to see both its old and new programs. Not that the traditional ways have been forsaken: Sands said Family Theater is in talks with Salt and Light TV in Canada to show “Family Dinner,” and some of its classic radio shows have found a home on the Eternal Word Television Network’s radio service.

But back to TV. “We have a number of these (videos) coming out. A new one will be ready for the religious education congress in Anaheim (California). We have another one that will show up around May or June and, hopefully, a third release coming out in the summertime that touches on the rosary and the life of Christ, as well as being good entertainment,” Sands said. “We’re also strongly gearing up in that content on our YouTube channel, which has those classics, but also new content as well.”

Just like there is a myriad of distribution channels that don’t include TV channels, there also are ways to be considered a star that don’t involve being part of a long-past “golden age” when there were just a relative handful of avenues to gain the popularity of the masses.

“Nobody’s going to come up on the Oscars,” Sands admitted of his repertory company. “But our (‘Family Dinner’) lead (Paulina Cerrilla), she was on ‘The Voice,’ and she’s actually a recurring actress on Nickelodeon, ‘Awesomeness TV,’ and it’s often. … Gabriel Burrafato, who’s the dad, he’s been on ‘Law & Order,’ ‘CSI’ and a number of TV shows. He actually plays Dean Martin in a stage show in Vegas. And our ‘Rosary Stars’ video has Hall of Fame ballplayers.”

But Sands himself is living proof that sometimes you can make it in the mythic Hollywood way. Just as Lana Turner reportedly was discovered at the soda counter of a Hollywood drugstore, Sands started working for Family Theater in 2003 on a part-time basis as a shipping clerk.

PREVIOUS: Books explore the changing and evolving reality of marriage