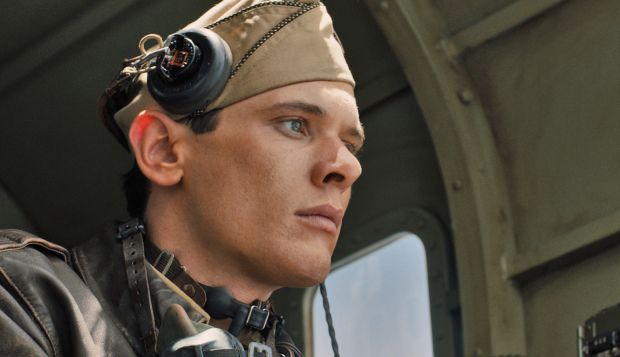 Jack O'Connell stars in a scene from the movie "Unbroken." (CNS photo/Universal)

NEW YORK (CNS) — Positive values permeate the inspirational fact-based drama “Unbroken” (Universal). Despite its admirable qualities, however, the film also represents something of a missed opportunity.

That’s because, in bringing Laura Hillenbrand’s best-selling account of one U.S. airman’s experiences during World War II to the screen, director Angelina Jolie emphasizes his sufferings at the expense of the remarkable attitude of forgiveness he was eventually able to adopt toward those who had abused him.

The aviator in question is Louis “Louie” Zamperini (Jack O’Connell). As early scenes demonstrate, Louie started life as a mischievous, directionless boy (C.J. Valleroy). With the help of his supportive older brother Pete (John D’Leo), though, Louie discovered his talent for running, a gift that propelled him all the way to the 1936 Berlin Olympics.

As an Air Force bombardier serving in the Pacific Theater, Louie would go on to confront far more formidable challenges than those to be found on the track. Together with his best friend, Capt. Russell “Phil” Phillips (Domhnall Gleeson), and their crewmate tail gunner Francis “Mac” McNamara (Finn Wittrock), Louie survived a crash landing at sea, only to face nearly seven weeks adrift on the open ocean.

Eventually taken prisoner by the Japanese, Louie was singled out for mental and physical mistreatment by Mutsushiro Watanabe (Miyavi), the unbalanced commander of his POW camp. In response, he drew on the same determination that had enabled him to rise to the top as an athlete to endure through a marathon of cruelty.

Working from a script by Joel and Ethan Coen, Richard LaGravenese and William Nicholson, Jolie vividly re-creates the brutality to which Allied captives of the Japanese were all too often subjected. But she relegates her main character’s unusual, if not unique, spiritual achievement in reconciling with his former persecutors to a written epilogue.

Viewers of faith will be all the more disappointed by that decision since the movie’s opening suggests that Louie’s Catholic upbringing was at least the indirect inspiration for this hard-won ethical accomplishment.

Louie later shows ambivalence toward Phil’s uninhibited display of prayerful devotion in the wake of a close call in the air. Yet the screenplay implies that at least a residue of Louie’s religious training remained with him as he faced the soul-testing rigors of his traumatic confinement.

The film contains combat and other violence, including torturous beatings, rear male nudity in a nonsexual context, a couple of uses of profanity and of crude language, a few crass terms as well as a bit of mild sexual humor. The Catholic News Service classification is A-III — adults. The Motion Picture Association of America rating is PG-13 — parents strongly cautioned. Some material may be inappropriate for children under 13.

NEXT: It’s a sure bet there’s little sympathy for ‘The Gambler’