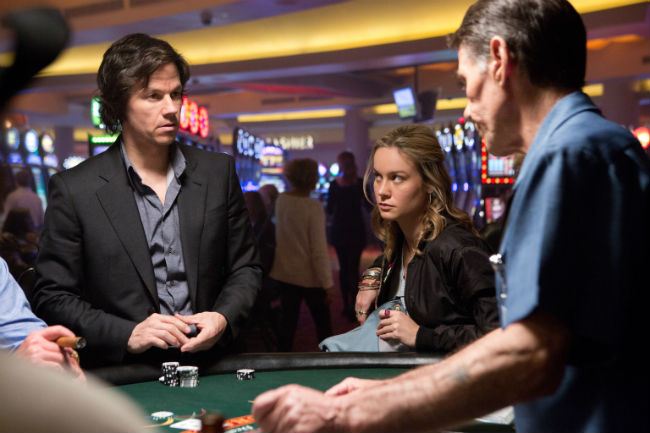 Mark Wahlberg and Brie Larson star in a scene from the movie "The Gambler." The Catholic News Service classification is L -- limited adult audience, films whose problematic content many adults would find troubling. The Motion Picture Association of America rating is R -- restricted. Under 17 requires accompanying parent or adult guardian. (CNS photo/Paramount)

NEW YORK (CNS) — Perhaps intended as a giddy ride through the gritty world of underground betting, “The Gambler” (Paramount) comes off instead as a bleak drama whose underlying outlook veers between materialistic pessimism and naive romanticism.

Director Rupert Wyatt’s remake of Karel Reisz’s 1974 film focuses on cynical college professor Jim Bennett (Mark Wahlberg). When he’s not transforming his English literature class into a whining seminar on the elusiveness of genius — and the pointlessness of trying to work, or even live, without it — Jim occupies himself by indulging his gambling addiction.

Over the course of a single disastrous night, Jim’s fondness for high stakes — which already has him running a large deficit — lands him in staggering debt, partly to underground casino operator Mister Lee (Alvin Ing) and partly to Neville (Michael Kenneth Williams), a surprisingly witty loan shark.

Jim’s compulsion, so we infer, derives at least in part from his wealthy upbringing and from the ease with which his emotionally unsteady mom (Jessica Lange) long ago kicked his pa to the curb. Such ancient family history notwithstanding, Jim puts the squeeze on Mummy, though the resulting respite is short-lived.

A more exacting source of possible relief is to be found in the hefty shape of yet another gangster, Frank (John Goodman). Though he presents himself as even more ruthless than Jim’s current creditors, Frank winds up taking a kindly interest in his potential client — to whom he imparts his philosophy of life in terms entirely unprintable.

Back in his daytime persona, meanwhile, Jim woos uber-gifted Amy (Brie Larson), his most promising student and the bright beacon summoning him to a more straightforward life.

Given privileged Jim’s egotism and irresponsibility — he has, after all, no one to blame but himself for the fix he’s in — it’s difficult to expend much sympathy on him. So it’s a safe bet that those few moviegoers for whom his chancy story makes acceptable viewing will find that their investment in it yields poor returns.

NEXT: Joan of Arc: A Life Transfigured