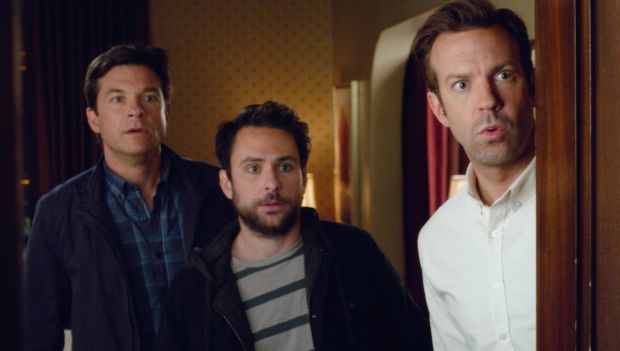 Jason Bateman, Charlie Day and Jason Sudeikis star in a scene from the movie "Horrible Bosses 2."

NEW YORK (CNS) — In the 2011 original to which “Horrible Bosses 2” (Warner Bros.) serves as a follow-up, a trio of bunglers set out to murder the workplace superiors who were making their lives miserable.

While the sequel finds the same characters intent on the lesser offense of kidnapping, a base and frivolous treatment of human sexuality, together with an excess of foul language, makes this second go-round as unacceptable as the first.

Hoping to free themselves permanently from having to take orders at the office, friends Nick (Jason Bateman), Dale (Charlie Day) and Kurt (Jason Sudeikis) have become aspiring entrepreneurs. Their plan is to market an innovative showerhead Dale has invented.

Facing bankruptcy as a result, the pals strike on the plan of abducting Rex and using the ransom money to stave off ruin. On the advice of Dean Jones (Jamie Foxx), the same shady ex-con who offered them guidance during the first film, they decide to drug Rex before snatching him to make sure he doesn’t put up any resistance.

Characteristically, the constantly bickering buddies make a mess of things and decide to call a halt to the whole enterprise. But Rex, it turns out, has other ideas.

But the reintroduction of compulsively bed-hopping Julia — the amigos break into her office to steal the nitrous oxide — leads to visuals and dialogue demeaning to human dignity and marital faithfulness. Add to that the constant volleys of vulgarity in the script, and the appropriate viewership for “Horrible Bosses 2” shrinks to nil.

The film contains distant but graphic images of casual and aberrant sex, much sexual humor, mature themes, including adultery and homosexuality, frequent uses of profanity, pervasive rough and crude language and an obscene gesture. The Catholic News Service classification is O — morally offensive. The Motion Picture Association of America rating is R — restricted. Under 17 requires accompanying parent or adult guardian.

NEXT: ‘The Theory of Everything’: A story of ‘When Faith Met Science’