‘The Theory of Everything’: A story of ‘When Faith Met Science’ 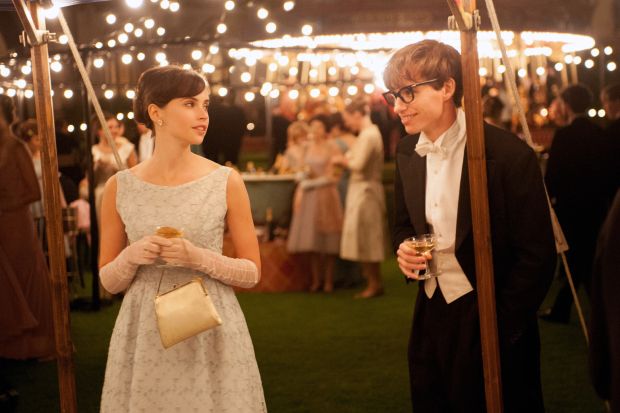 Felicity Jones and Eddie Redmayne star in a scene from the movie "The Theory of Everything." (CNS photo/Focus Features)

NEW YORK (CNS) — Cosmology and metaphysics, both challenging enough as academic topics, don’t blend well into an autobiographical film. That’s the lesson of “The Theory of Everything” (Focus).

With a script by Andrew McCarten — based on the memoir “Travelling to Infinity: My Life with Stephen” by Jane Hawking, ex-wife of famed physicist Stephen Hawking — director James Marsh’s drama is, for its first hour, an impressive period piece set in 1963 Cambridge University.

After that, the story shows the hazards of having to tiptoe decorously around messy domestic complications when all those involved are still very much alive.

He’s working on his doctorate, and tells her that his cosmological specialty, the study of the origins of the universe, is “a kind of religion for intelligent thinkers.” Hawking adds that he has “a slight problem with the whole celestial dictator premise.”

Love finds its way nevertheless. But just as both their romance and his academic career are blossoming, the blight of Stephen’s motor-neuron disease — an offshoot of amyotrophic lateral sclerosis, better known as Lou Gehrig’s disease — takes hold. Doctors give him just two years to live.

He stubbornly overcomes that prognosis, although at a steep price for Jane, who endures his physical deterioration and the stress of raising their two young children. Discussions of religious faith, or the presence of God in the workings of the universe, disappear altogether.

She’s feeling trapped and unhappy when her mother, Beryl (Emily Watson), suggests she join a church choir. Jonathan (Charlie Cox), the choir director, is handsome, sensitive and helpful. So much so, that he becomes both au pair for the kids and a volunteer attendant serving Stephen’s needs, which include being taken to the toilet.

So yes, we see where all this is headed — or perhaps we infer it would be the better phrase. There’s the occasional gesture, sometimes a line or an exchange of glances, and meanwhile, Stephen keeps smiling through. One senses the input of platoons of lawyers in these portrayals.

Jane and Stephen never really have a falling-out. They simply grow apart as his fame speeds up, along with the pace of his lecture tours.

By the time of the 1988 publication of his immensely popular “A Brief History of Time,” Stephen has taken up with his nurse Elaine (Maxine Peake), an earthy type who recognizes he’s still a sexual being and happily delivers his monthly Penthouse magazine.

Hawking himself, of late, has embraced atheism. But any sense of a spiritual journey, whether positive or negative, is not to be found in this movie. Instead, this depiction of them only allows Hawking and Jane to be completely human and occasionally flawed.

The film contains fleeting references to marital infidelity and pornography and some sexual banter. The Catholic News Service classification is A-III — adults. The Motion Picture Association of America rating is PG-13 — parents strongly cautioned. Some material may be inappropriate for children under 13.

NEXT: Film offers ‘renewed understanding’ of Mary’s importance to church